#Alltogethernow and March with Pride this week in Liverpool. 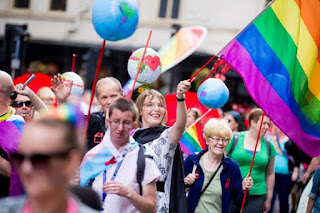 Liverpool Pride returns to the city’s streets this week and will get off to a colourful start with the annual Pride March.
Thousands of people are expected to join the parade, with the new 2018 route being revealed for the first time.
The annual March, this year in association with the Mayor of Liverpool, is always one of the highlights of Liverpool Pride, the region’s annual LGBT+ festival.
The free festival of all things fabulous, held in association with headline sponsor Barclays, takes place on Saturday, 28 July and Sunday, 29 July.

The Pride March takes place on Saturday, 28 July and the formal Muster will be held at St George’s Plateau at 10.30am. There will beentertainment and speeches from 11am, and the March itself will start promptly at 12 noon.

The route will take marchers past St George’s Hall and through Queen Square, then along Whitechapel and right up Lord Street towards Derby Square. Making its way down Castle Street to the Town Hall, it will then go along Dale Street with another right turn in to North John Street before it branches off left along Victoria Street.

Marchers will then make their way up Stanley Street and along Moorfields, and will end in Tithebarn Street, the new location for Liverpool Pride this year.

Andi Herring, Co-chair of Liverpool Pride, said: “The March is one of the most hotly-anticipated parts of Pride, with thousands of people taking part, and I know this year will be no exception.

“We’re really excited about the location for the 2018 festival, and the new route, which finishes close to the festival stages, will take marchers on a winding journey through the heart of historic Liverpool, along with the city’s vibrant Gay Quarter.”
Mayor Joe Anderson said: "Pride is one of the highlights of Liverpool's calendar of events, and the annual Pride March is a wonderful demonstration of diversity and equality.
"I am proud to support this year's March which will fill our streets with a brilliant rainbow of colour as it celebrates the 2018 Pride theme #AllTogetherNow."
Individuals and groups are being urged to register to take part in the March. Visit the Liverpool Pride website and complete the formwww.liverpoolpride.co.uk/march-registration

You can also donate on the Pride website www.liverpoolpride.co.uk
#AllTogetherNow, the theme of 2018 Pride, complements the wider Liverpool 2018 celebration of 10 years since the city was European Capital of Culture.
It is also 10 years since the death of gay teenager Michael Causer, who lost his life on August 2 2008 after a vicious homophobic attack.
Liverpool Pride Trustee Joan Burnett said: “We would love to see banners, flags, puppets, costumes and lanterns that represent what #AllTogetherNow means to you and or your group.

“Michael Causer’s favourite flower was the daisy – maybe paint a daisy on your face or find another way to recognise his emblem?

“Are you a sports or other kind of team? If you have an arch-rival, maybe think about contacting them and asking to March together! Wear your team colours, uniforms or other identifiers of what is most important to you.”

Liverpool Pride is marking its ninth consecutive year, in which time it has become the region’s established annual celebration of all things LGBT+.

It has grown to become one of the city’s major annual events, attracting more than 50,000 festivalgoers in 2017 to celebrate lesbian, gay, bisexual and transgender communities.
Liverpool Pride Festival is proud to be working with headline sponsor Barclays; sponsor Manchester Airport; Homes For Everyone; Mayor of Liverpool; Liverpool City Region / Metro Mayor and Media Partners Radio City, DIVA Magazine, The Guide Liverpool and Gay Times.

The festival complements a city-wide season of events and performances to mark #Liverpool2018 – marking 10 years since the city was named European Capital of Culture 2008.
The official Liverpool Pride 2018 trailer https://youtu.be/EN-St8vQR_4
Keep up to date with Liverpool Pride’s new announcements at:
Website www.liverpoolpride.co.uk
Facebook LiverpoolPride
Twitter @LiverpoolPride
Winner of the Liverpool Echo Community Event of the Year 2017 Award.
at July 24, 2018