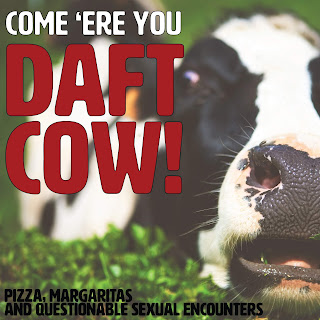 Presented as part of the Greater Manchester Fringe Festival, this is a two-hander by Paige Gadsby and directed by Rachelle Moose for NorthSouth Creatives.

Upon entering the auditorium loud 'girl-power' popular music was playing, and the stage was set to look like a teenage or student girls' bedroom. Clothes strewn over the floor, make-up, mirror, dressing gown, food remnants, and of course a large cuddly toy. Enter Molly (Casey Morgan). She is upset, boyfriend trouble no doubt. She weighs herself, cries; she looks at herself in the mirror, cries. she binges out on chocolate, cries. There is both humour and pathos, and indeed this first scene started the show excellently and I had high hopes for the rest of the play.

Sadly, the nature of the play; which amounted to little more than teenage gossip between two best friends, in very short scenes, didn't actually go anywhere or say anything. It was just that. One problem that became evident was that because they were simply chatting to each other as girls do [about love, sex, the vagina, dildos, weight loss, etc etc ] the volume dipped and I found myself missing the ends of sentences. The scene changes, of which there were many, were overlong and mostly unnecessary. Most of what was said in each scene could have been covered in just the one long scene.

What started as a comedy [albeit with serious issues] soon descended into a tragedy. The penultimate scene saw the two of them standing at the graveside of someone very dear Alex (Paige Gadsby), Molly's best friend. We never did find out who had died (or if we did, then it was in a part of the dialogue which went unheard), and yet it must have been someone very close to Alex as the final scene had her staying in bed for a week not contacting or communicating with the outside world.

The play as it was presented, was very disjointed, full of mixed messages and very unclear exactly what the writer wanted to say to the audience. There were too may ideas left undeveloped and too many issues which were given a starting voice and then glossed over or ignored.

Unfortunately what started out as an interesting and humorous look at love, dating and sex from the female perspective went nowhere at all until the last two scenes which came as a bolt out of the blue, totally unrelated to what had happened previously and in a completely different mood.

I would hope that this play is in the early stages of development and would most certainly suggest that the writer decides exactly which issues they want to tackle (certainly not all of them!) and in which genre.

....and why were both actresses always barefoot!?