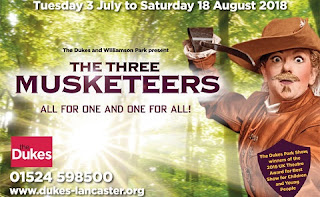 During a brief discussion with mother on Thursday afternoon we reached the mutual conclusion that our trips to see the Dukes' park shows, which we try to see most years, is probably the most civilised family occasion we have all year. We pack bucket loads of food, arrive early and enjoy a pleasant picnic before we stroll around the park watching The Dukes open air promenade production. This is their 31st year of doing this but this time with a new Artistic Director Sarah Punshon, and the story is The Three Musketeers.

The name of musketeer has always puzzled me, these are a band of legendary swordsmen loyal to their King who swashbuckle (my word of the month) their way to foiling the evil machinations of the Cardinal Richelieu. They are joined by trainee musketeer D’Artagnan who is actually a girl pretending to be a man. At one point the girl pretending to be a man pretends to be a man who is pretending to be a girl. What puzzles me is that there’s not a musket in sight! There’s actually something devilishly Shakespearean about casting drag artist Lucy Parkinson as D’Artignan. It’s a fun and interesting new take on the character which evokes historical references to the real historic figure of the Chevalier D’Eon, a French transgender noble who served France as a spy and diplomat earning the legion d’honneur in the process. It’s a fine reference but one I suspect may be lost to large sections of audiences perhaps.

It’s a very enjoyable way to spend a bright summers evening. There’s bags of comedy and lots of energy from the company which is what keeps the play going and mitigates some of the flaws in the production. For instance, stylistically there are a few contradictions. There’s a punk rocky vibe to the sound design and it’s pretty cool to have that. It lends a political edge to the performance which if it could effectively join up with other elements to create a cohesive style and tone then would be a fantastic artistic decision. As it was, the clash with the more slapstick and pantomimic aspects of performance lead to a production which artistically never really achieved full cohesion.

Despite this there are a vast range of interesting and cool ideas which are experimented with and should have found favour with audience members. The punky vibe in the music, the riot of colour in the costumes and the slightly political edge in the writing which was new and refreshing.

Nevertheless, the production honours the time old traditions of the Dukes' annual productions. It’s fun and cannot fail to be likeable. The audience around me loved it and that is something worth noting. The Dukes, like all regional Theatres are seeing the need to reach out, experiment with new things and include more and more people in the Theatrical experience. Towards that aim they involved their community company to fill the stage in non-speaking roles.

What disappointed me though was the fight direction. I’ve no doubt that witnessing the energy displayed in other parts of the production the company is capable of more challenging fight routines but is sold out by lacklustre fight direction which is more movement based with the odd tapping of swords than a full on brawl. We didn’t need to see guts spilt (though it would have been fun) but an element of risk was crucially lacking.

A director, new to the park shows, striving to experiment and put her own mark on things will perhaps resent my sometime negativity, but, I’ve seen a lot of these shows now and know what I like, which is not really helpful for others. They take me back to my childhood, escaping for a few hours in a park on the top of a hill. When a little bit of magic combines in both story and setting the effect can be beautiful.

The weather is looking good at the moment. Pack up your picnic and take a punt on this show.