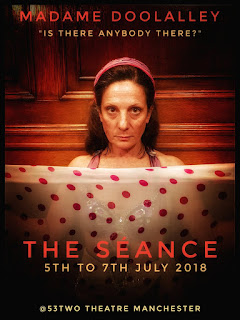 Andous Productions proudly claim to be able to 'explore the mysteries of The Other Side' with their famous and experienced Medium, Mme Du Lille (which curiously seems to have changed from the rather more humorous and accurate original name of Du Lally.). I can only therefore assume that the writer /director combination have changed their ideas somewhat from their first adverts - obviously tongue-in-cheek and farcical - to what I saw presented this afternoon, which was - despite some attempts to the contrary - much more serious and played not for laughs necessarily but with a degree of realism and pathos. It was therefore a play of mixed messages, not really sure which side of the fence it wanted to settle on.

The writing (Andrew Siddall) in fact was nothing new, indeed, despite the odd little difference here and there, was just a reworking of the famous cult film 'Ghost'. And the directing (Sarah Wilkinson) was unimaginative and predictable. Between them they had chosen a set which ill-suited the performance, giving over a large portion of the stage to a bedroom which was seldom used, whilst the other side of the stage was constantly being changed for every other scene... many scenes, always taking too long to change. This was absolutely not optimal and not only prolonged the show, but also made me lose interest in it.

Sadly, the acting too, never really got out of second gear. It took until about half-way through the play and the entrance of Mme Du Lille (Alexis Tuttle) before the energy lifted palpably and a more positive and thrusting dynamic, not to mention humour, was injected into the play. This was, to some extent taken up by David Bresnahan's mischievous ghost, but this too could have been developed more had you gone down the comedy route.

Staying firmly away from the comedy angle however was the protagonist Danny (Sam Danson) who couldn't elicit any humour from the fact he died by sticking a metal knife into a plugged-in toaster. He overplayed his hand with his proclamations of love to such an extent that it was flat and meaningless. Such a shame - but I really couldn't believe in him or his plight. Conversely however, Emily's (Lindsay Eavis) situation was very real and her wish to contact her husband and the humour and humanity gained from this excellently placed. A solid and believable role.

The rest of the cast stayed somewhat awkwardly in the middle-distance. At times they were superb, but mostly it all came across as very pedestrian and truly failed to engage. Perhaps with a script overhaul and a different spin on the direction the play is meritorious, but in its present form sadly has little or nothing new to say.