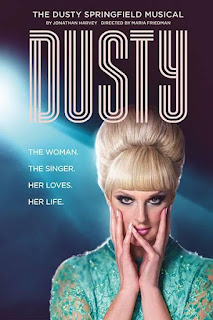 I have been a fan of Dusty’s music since my teens and would bedroom sing ‘Will You Still Love Me Tomorrow?’ until  my parents’ ears bled so I was a tad excited to watch this exciting new musical by Jonathan Harvey and directed by award winning performer and director Maria Freedman.

Dusty’s unique voice and influence can still be heard through modern popular music and many believe it to be as indelible as The Beatles legendary sound. Later in the show her friends quip to her on her death-bed, “You always wanted to be black!”

This remarkable biographical musical was a spectacle to behold and listen to from start to finish.It charts the beginning and rise to fame of this icon to her untimely demise at 59 from breast cancer. Born in London in 1939 as Mary O’Brien into a house of conflict, the dialogue made lots of references to her parents’ anger and shouting and later referring to Dusty’s self-harming as a way to deaden the pain and make people look at her.

The show burst into life with ‘Ready Steady Go’ being filmed. Remember 5-4-3-2-1? What a fantastically versatile ensemble of swing performers who danced and played so many supporting roles with ease!  Dusty was set to appear as the headline act but was in the toilets suffering from crippling stage fright being cajoled by her assistant and make-up artists and lifelong best friends, Pat and Ruby, played by Esther Coles and Ella Kenion who offered the supporting comedy all evening. Eventually, the Dusty we recognise emerges and lights up the stage commanding everyone’s attention and love with her trademark lashes, kohl eyeliner, beehive hairdo and fluid arm movements singing, ‘ I Only Want To Be With You.’  The audience realised they were in for a treat as Dusty, played and 'owned' by Katherine Kingsley, simply shone in her role from start to end. She looked and acted the part with her slightly affected, husky-toned accent and spot-on impersonation of her iconic voice and diva performance. It was like watching Dusty Springfield live. Perfection. It was a flawless performance and the audience lapped up every minute.

As her success grew, supported by her manager Billings (Rufus Hound) her friends watched her helplessly as she succumbed to her demons. Whilst recording in Brooklyn and the home of Motown she met backing singer Lois who was to become her long term lover. Sadly, she introduced her to alcohol and then the downward spiral began for Dusty, and her partying and drinking which damaged her career so badly that she was sacked. This forced her to return to the US where in LA she led a life of bisexuality and drug addiction. Living off the royalties of her records.Lois stood by her and when her friend Elton John gave her former backing singer Kiki Dee (played with conviction and Northern humour by Alex Bowen) the song ’Don’t Go Breaking My Heart’ this sent Dusty over the edge. With Lois’ support she got clean and went back into the recording studio. Finally convinced she is getting her singing mojo back again, Dusty’s love left her to start a life of her own and a family.

Years later, they reconciled on Dusty’s death-bed reminiscing about their joys and regrets.   When Dusty returned to the UK supported by her lifelong friends she was invited to perform with an up-and-coming Electro-pop band (The Pet Shop Boys). One of the highlights of the evening was an ensemble performance, complete with metallic jumpsuits, wigs and fluorescent frames for their song, ‘What Have I Done To Deserve This?’ where Dusty featured as the soloist; brought us what was to be Dusty’s final foray into live music.

Dusty: The Musical is a sublime piece of musical theatre. It has everything a musical-lover demands: a great libretto (a sad yet true biography), legendary music, wonderful acting by the entire cast, an amazingly fluid set and creative lighting but most importantly an outstandingly memorable leading lady who dazzled throughout.     The cast received a thoroughly well deserved standing ovation before the bows from this appreciative and thrilled first audience at The Lowry. Luckily, Dusty came back at the very end to sing on thrust podium Eva Peron style, her most memorable hit,.‘You Don’t Have To Say You Love Me.’ We laughed, we cried, we were stunned to silence as we watched her fall from the heady heights of fame. Images of her funeral were projected onto Tom Pye’s set which had morphed seamlessly all evening through 60s TV studio, to Motown, to LA, to South Africa (where Dusty historically refused to perform to an Apartheid audience and was promptly deported such was her love of black people and their music), through 80s pop to her home in 1999 London.

This production was exquisite and was the best piece of musical theatre I have been privileged enough to watch in a while. Go and watch it if you’re lucky enough to get a ticket.