On Behalf Of The People - Waterside Theatre, Sale. 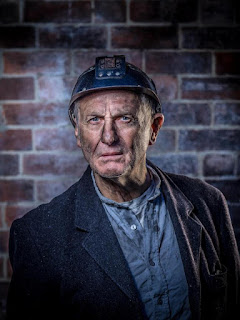 On Behalf Of The People is a dramatisation of real-life accounts concerning the Yorkshire mining community and how it was affected by WW2 and how Labour finally won, and how the nationalisation of the pits was seen as the best thing since sliced bread.

The play was performed in the select surrounds of the wood-panelled Chambers, upstairs in a room I had never before seen. The style and decor of the room being at odds with the style and decade of the story, it had me wondering if this was a wise choice of venue; however, as soon as the play started, the peripheral surrounds were completely forgotten and they could have been telling their story anywhere!

The acting area set out in the round with two rows of seats on all four sides, it was an intimate setting. This as nicely reinforced by the cast welcoming us in and inviting us to sit. They came and chatted to us, giving us knitting or red rosettes, or chatting about 'coil' (how a Yorkshireman pronounces 'coal'). This was a lovely idea and totally reinforced the close audience / performer relationship as we would become pit workers, labour supporters etc in the narrative that followed.  What didn't work so well about this was that occasionally the performer forgot that they were in 1940s and not the present day, and the music playing in the background was distinctly modern 'pop'.

However, that was a minor thing taking the production as a whole, since once this preamble was over, the music changed to suitable period songs, and the acting was simply excellent. It is one of the hardest forms of acting, at least it was for me when I was actively involved in the profession, to be so -up-close-and-personal with an audience. I much preferred the 'safety' of a stage and, if possible, an orchestra pit too to divide us.

In a nutshell, the story concerns a mining family in, I assume the fictional mining town of Burnston, with the fictional, but highly 'recognisable' Burnston Colliery, the town's focal point. It is 1945, and one of the family's two sons returns home from the war intact. The father, a staunch union man and dedicated miner, embittered by the fact that he couldn't come to terms with the loss of his other son - not, however, because he died in the war, but because he was the spitting image of his father.. union-hearted and stubborn. It takes time for a reconciliation to happen, but when it does, it paves the way for father and son to work together and respect each other. The father slowly becoming more and more ill due to a failure of the lungs from years working in the colliery, and his son, courting his sweetheart (for a lot longer than would be considered well-mannered, despite their time apart during the war), and working hard in the now Nationalised pit, with ideas of joining management since he would rather see the pits being managed by those who know what it is like, than office-boys from the city with no idea.

The family have to cope with many changes during this period, and it is a very heart-felt and moving story they tell. Written by Ray Castleton and produced by The Melting Shop Theatre Company, the play was originally commissioned by the NCMME as part of their celebrations to mark the 70th anniversary of the nationalisation of the coal mining industry. And with just 4 very strong and intelligent performances by Ray Ashcroft (George), Danny Mellor (Tom), Kate Wood (Conny), and Lizzie Frain (Liz), they will take you back to a time when pulling together meant just that, and families were part of a community, and the community spirit was still a major part of life.

The costumes were excellent (even if Tom's uniform looked too new!), everything looked totally authentic, and despite the minimalist nature of the set, it worked surprisingly well. If I have to be negative about anything at all, then the accents were not totally constant and consistent, but again, taking the play as a whole, that is a minor consideration.

Gritty, earthy, powerful and highly emotive. This play will make you laugh and cry in equal measure and the strong and utterly real performances, will have you hooked until the end. Beautifully realised.