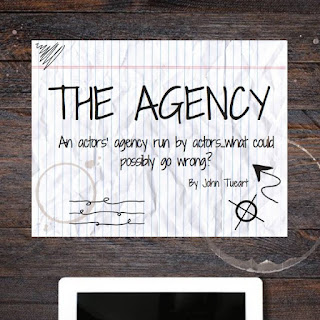 The Agency, produced by Naomi Albans and directed by Keeley Fitzgerald, is a 90-minute
play written by John Tueart, who also acts in the main role of Guy; a disillusioned actor running a
mediocre actors' agency. I first heard about this play over a year ago and have eagerly awaited an opportunity to see a performance. The 2018 Greater Manchester Fringe Festival has certainly afforded me that at the The King’s Arms, Salford.

As a reviewer who is also an actor, director, producer and writer, I suspected before I arrived
that I would identify with this play … and I did! However, I did have the odd reservation; would I
find it cliched because I know too much about the subject-matter? Would it feel like a busman’s
holiday that grates on my nerves?

The answers are no and no! I found myself laughing alongside the audience as each character
was skilfully brought to life and the jokes flowed. The story follows Guy (John Tueart) and his
haphazard team of out-of-work actors, as they negotiate the ups and downs of running a
co-operative agency.

The agency is staffed by Janine (Marie Friend), an overzealous receptionist with a desire to
appear efficiently organised and her co-worker Gem (Beth Hunter). Gem isn’t as bothered
about being efficient and more concerned about effectively eliminating her latest hangover.
Meanwhile, Guy has to maintain some semblance of order between his stable of actors that includes; shyly negotiating his emotions around the plain but lovely Chloe (Lucy Brennan), who he clearly has feelings for, appeasing the keen but frustrated Eddie (Matthew Gordon), who doesn't quite have the dashing looks of a romantic lead, and ensuring the ex-soap star turned presenter Jilly (Nancy Monaghan) doesn't completely upset all and sundry with her ego-stroking drug-enhanced arrogance.

Whilst carefully juggling all of the above office politics, Guy has also been placed in the position
of potentially representing Dean (Jordan Tweddle), a profiled actor who could put this struggling
agency on the industry map.

Complete with jealous hissy fits from Eddie and hilarious confessions from Gem, we were
treated to the silver-tongued claptrap of Dean who seems to be dubiously related to everyone
in the industry.

This play exposes the real experiences of the performance world and subtly tackles some of the
ever present insecurities people often refer to in this environment. Most importantly, it exposes the
characters of life.

No matter what industry you (the audience) work in, you will definitely have met one or all of
these characters in everyday life. The receptionist who sees and hears everything. The ambitious
young man who tries too hard for promotion. The one that’s hungover every Monday and can’t
function until Wednesday. That manager who keeps disappearing to the loo slightly too often!
Fortunately, identifying with these characters isn’t enough for writer, John Tueart, as he then carefully allows each character to unravel until we see their fundamental flaws and insecurities. Once these are exposed, it is a joy to see what happens next.

Fundamentally, this is a cautionary tale that states; good things really do come to those who wait.
It underlines ‘patience is a virtue’ and kicks the butt of ‘liars will always get found out’.


I’d like to praise Keeley Fitzgerald who’s direction is layered with technical triumphs.
She could easily have allowed this play to be a showcase for one actor to shine.
Not so, Fitzgerald has ensured each actor performs a steady, balanced and uniformed
performance which, funnily enough, also underpins one of the themes of this play - teamwork.