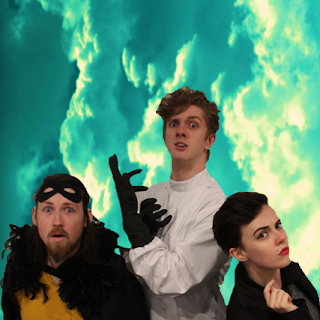 Taking their inspiration from shows like The Comedy Store Players and Little Britain, Hivemind Theatrical Solutions have created a scenario where wearing the cape and superhero costume doesn't automatically mean you're the good-guy! Dr. Thunder and his two accomplices want to take over the world; but before that they need to rob a bank; but before that they need to find a name for their organisation!

We are the audience of a TV News Programme, Newsmore At 10 and we see Diane Newsmore as she interviews those supposedly in the know about this criminal gang, and she turns their words into fake news and credit-rating sensation

Meanwhile back at Camp Thunder, the boss, Captain Thunder (wearing silver lightning flashes on a white medical coat and white plastic wellington boots!), his hapless but well-meaning side-kick and a laconic and satirical Lady Killer (or maybe that's Ladykiller); they unsuccessfully hold up the bank, and one of their members is caught by a vigilante group calling themselves The Costume Observational Task Force.

It's all a bit silly and naive, and comes across as somewhat 'studenty' and under-rehearsed and even the cast seem a little embarrassed about being on stage. [was that intentional??]The pace is slow, and it's very short on laughs especially with the show lasting an hour, the time drags.

The use of projecting from a mobile phone onto a white card didn't work either unfortunately. The first time there was far too much stage-lighting and so the images were a white-out, and the second time it was impossible to understand or hear anything and so the gag (if there was one) was lost.

The most unfortunate thing about this is that the premise is actually a good one with comic potential in abundance. Sadly Hivemind, despite a few quality lines, seemed to have side-stepped the truly good material for this scenario.