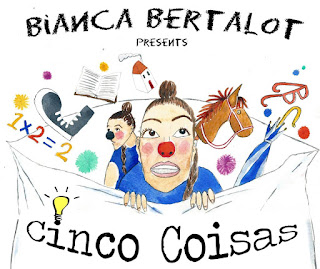 Bianca Bertalot is a Brazilian performance artist and alternative therapist; and in this show Cinco Coisas, she tries to combine these two elements of her professional life to bring a fun and informative one-woman show about The Five Things (Cinco Coisas in Portuguese!) to a Greater Manchester audience.

But what are the five things, I hear you ask. According to Bertalot they are the five basic developmental needs of a child: Place, Nurturing, Support, Protection, Limitation.

Bertalot presents herself well, a warm and friendly welcome as we enter the auditorium and her pitch for this interactive and audience participatory show nicely done. However, she did say that if we did not wish to join in or contribute in any way that would also be absolutely fine too, and yet, that didn't seem to be the case.. we were all involved, whether we liked it or not! I am not sure that this was entirely her fault however. In the audience this evening were 10 people only and so we all took up (on her invite) the first row of seats. These 10 included a group of 5 from Hong Kong with limited English, and two of Bertalot's friends (both Portuguese native speakers), and so given this dynamic, to not be involved would have been both rude and obvious! Moreover, nowhere in the publicity for this show does it tell you that audience participation and interaction is expected - that was something of a surprise for me. It's not my thing at all, and was not wanting at all to join in!

Bertalot's aims are somewhat grandiose and worthy, and her research into this area of work undeniable; however, despite the friendly and open nature of the performance and Bertalot's skill as a performer, I was still left wondering at the end of this hour long presentation two things. Who was her target audience? and what did she hope to gain from such a performance?

The opening gambit was patronising and belittling. We were all coherent adults and yet we were treated like children with learning difficulties as we had to learn how to pronounce 'cinco coisas' and sing it in a rhythm. The rest of the show see-sawed between two characters of her own creation; a stern-faced lecturer trying to inform us about the Five Things - and doing it in such a way as to talk down to us with that sickly smile of self-righteousness on the face (of course I understand that that was the characterisation) - and a playful, mischievous young girl called Melanie who just wanted to play, have fun and be accepted by the audience. Despite these two characters being excellently defined and cleverly judged, neither appealed to either the adult or the child in me. If we had wanted a lecture on child psychology then we would have gone to one, and if clowning and bouffon is your thing then better to watch it than have to become a part of it. Sadly there were no children in this evening's audience, but somehow I cannot see either of these characters particularly appealing to children either. the lecture would be boring and go over youngsters' heads, and they would more than probably find the clowning daft and, dependant on age, perhaps a little patronising. [although they would have LOVED the pompom fight!]

Bertalot is a talented and consummate performer, that much was clear, and her simple change between the two contrasting characters quick and clever using a red nose for one and glasses for the other - the final sequence when she wore both at the same time was a lovely idea. The show however felt very much more rooted in a style of theatrical presentation foreign to British audiences [I have seen similar styled shows in Europe before]. Further, the juxtaposition between physical theatre / clowning and information giving was an odd one. Perhaps the informative part of the show would work in areas where these 5 things are not already a 'given'. However, for the majority of people in the UK, this lecture is something akin to trying to teach your grandmother to suck eggs.

To be fair, the show might 'work' with a larger and more diverse audience. It would certainly work better in a non-traditional theatre space with audience in a circle on cushions. But the choice of venue for this show was far from optimal, and having such a small and difficult audience must have made her job much harder than normal!

Being very fond of physical theatre and very much in need of a jolly good belly laugh or two, I was looking forward to this show. However, most unfortunately I left feeling rather flat and disappointed.