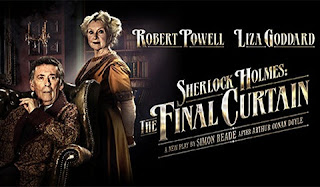 Now here was something I was really looking forward to. A brand new Sherlock Holmes mystery, written quite recently but in the style of Arthur Conan Doyle, by Simon Reade. Not only this but the play would be starring two excellent and renowned thespians namely Robert Powell and Liza Goddard. What could there possibly be not to like about this?

Well, quite a lot it seemed. I'm just not sure where to begin....

David Grindley's direction was slow and lacklustre at best; and there was absolutely no element of suspense wrought from this script, it simply plodded on at a Sunday stroll throughout. Whilst the script itself would have made a very fine one act play, this was dragged out far too much. If one shaved 20 minutes from the play, and lost the interval, we might very well be getting somewhere!

The set (Jonathan Fensom) was quite interesting and the radio broadcast at both beginning and end worked well, as did the use of the slow dark curtain to cover the changes here too. However once we were in 'flashback' to the actual story, using the curtain to change the scenes became both boring and  predictable and we could see stage-hands moving the set behind. And as good as the 221b Baker Street apartment was, it was too far back, the whole thing needed to be at least 2 feet further towards the front of the stage.

This story tells of an ageing Holmes, now in retirement, living on the south coast under the assumed name of Smith! His most deadly enemy Moriaty has come back from the grave in the form of his sister to have their revenge. It turns out that Moriaty's sister was called Mary and she married Dr. Watson. It takes a bit of a leap of faith to believe that Watson's wife was all the time just biding her time; with their son (killed in action) actually being Mary's son that she had through her incestuous  relationship with her brother! However, what Mary hadn't counted on, and which was her downfall, was Holmes' grasp of modern technology. The modern technology being that of the early 20th century, but still, far advanced from the times of Holmes' fame.

Now hereby lies my final problem with this play. We all remember and know that Sherlock Holmes was a fastidious gentleman. Quick-witted and nimble-footed and sprucely dressed. His individual style included a pipe, which, for reasons best known to the writer, he had completely dispensed with. He was, however, a drug addict, and we even see him at the beginning of the second act injecting himself. Further, the sprightliness of both body and mind had vanished completely. Holmes was seen to be rather slovenly in fact as he kept his hands in his jacket pockets and slouched from scene to scene seemingly uncaring that someone may well be out to kill him. Of course this characterisation must have been what the script called for, but it certainly didn't correlate with my own thoughts on how a senior Holmes would look and behave; and I am certainly not in the minority there either. I should say though that when Powell was Holmes dressed-up as an old Irish sea-dog, Powell shone and showed his true acting ability here albeit all too momentarily.

Robert Powell as Holmes looked and sounded tired and somewhat distracted. whilst Liza Goddard's Mary was not feisty and vengeful enough. Certainly not enough to see her confined to a lunatic asylum. However it was Timothy Kightley as Dr. Watson who kept the ship afloat, and his lovely characterisation was the perfect balance between the Watson of old and the Watson of the now. A  special mention should also be made of Anna O'Grady who played the housekeeper at Baker Street. Her clear, crisp, carefully enunciated speech was a delight after listening to some of the other cast mumbling their way through the dialogue.