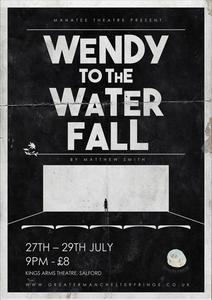 What happens when a young lady, currently residing in a psychiatric hospital and being treated for a mental condition, and berated by her nurse when she doesn't take her medication, has retreated to a 'happy place' due to her love of the films of yesteryear. Her place is where the modern colourful bright world of reality dissipates as her mind listens to 1940s jazz as she daydreams in black and white in the style of a long-passed Hollywood greatness.

Her nurse, whose professionalism and conduct is certainly questionable, brings her rented VHS videos (is that still possible?) until one day she learns that her local cinema, The Waterfall, is to be showing a one-off special of her favourite film; a forgotten and obscure cinematic marvel titled, 'The Busted Branch'.

This is the story of Wendy (the inmate) and her journey across the wild and forbidding suburban town known as 'the outside' to fulfil her lifelong dream (her 'destiny') and watch this film at The Waterfall Cinema.

Her journey first has her tricking her nurse [who for reasons best known to the writer she sees as a butcher who gives her 'Scotch Eggs' ], and escaping from the institution, which is done in a rather clever 1960s style Spy Thriller spoof (although more could have been made of this); and then finding, quite by chance, a house where a dotty and introverted lady has set her home up expecting guests for a party. Immediately this makes us question the nature of mental illness, as at this point the lady seems clearly more in need of help than the patient. - Are we therefore really on the outside as Wendy suggests or are we actually only travelling in Wendy's mind, and we are still in the psychiatric unit? This would explain the rather odd flip-chart presentations and disjointedness of the following exposition.

Of course, Wendy does finally make it to the cinema on time, and we all wanted her to; but the appearance in the background of her nurse brings us and her back to the reality of her situation.

It's a very interesting script / story; but certainly not without questions. Nothing is given to us about Wendy's life prior to being admitted to the hospital. She is only 28, and has vision problems [has this been caused by medication or is this part of her illness?]. We know she has been in the hospital for a year, but we have no idea why. Nothing is given to us about what she is suffering from. This makes it very hard for us to relate to Wendy and therefore ultimately empathise with her. Especially when we are shown another lady (ostensibly not a patient) who is more neurotic than Wendy.

Written and directed by Matthew Smith for Manatee Theatre, this is a very strong piece, but somehow has more of a cinematic feel to it than stage. Even the set design - despite its minimalism due to budget - gives the impression that this night work better filmed.

For this story to truly work then the audience needs more in the form of exposition. It is nevertheless, quite a compelling piece of theatre. This is due in no small part to the powerful and creditable performance of Abigail Standish who plays Wendy. Her energy and continued obsessional self-belief, combined with her somewhat eccentric way of somehow always making us feel that she is the female lead in one of her B+W films is engaging. Her relationship with her nurse Derek (Sam Hughes) is a little disconcerting, and it is also very unclear what his motives are, but it is her starting an unlikely friendship and alliance with Austyn (Heather Madden) - fellow inmate or nutty loner we don't know - that gives us the glimmer of hope needed and we see that perhaps Wendy is the only sane one in the play...?