The Muffin Men - The Witchwood, Ashton-u-Lyne 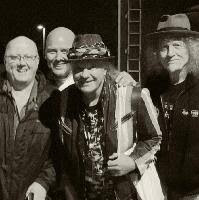 It’s astonishing to think that the Muffin Men, Britain’s premier Zappa tribute band, were formed as long ago as 1990, when their great patron was still in the land of the living!  In their twenty eight years’ existence their devotion to his music has not flagged and they have been rewarded with international tours, cult status amongst Zappa’s notoriously picky fans and - surely the biggest honour - have often being joined onstage by original Zappa sidemen.

There were no original Mothers available for this, the second night of a short summer tour, but that didn’t matter: the Muffins are primarily a band of enthusiasts who breathe new life into Zappa classics as well as deep cuts, a tradition inaugurated by the man himself whose latter tours often featured a ‘big band’ with a horn section. The sole horn player tonight was Mike Kidson who doubles as the band’s comedian (Zappa famously asked  the rhetorical question ‘Does humour belong in music?’) and wild card: like the other members of the band, Kidson is an accomplished improviser, weaving quotes from unexpected sources into the structure of Zappa’s songs (we got a snatch of John Colatranesque My Favourite Things).  Indeed, you could play quite a game of ‘spot the quote’ during the evening, as odd riffs and themes from other sources invaded the arrangements.

Part of Zappa’s notoriety is based on the fiendish difficulty of some of his compositions, with their tricky time signatures and abrupt changes of mood and pace, but the Muffin Men were more than equal to all the challenges, whether it be funk-jazz hybrids like Heavy Duty Judy, proton-fusion like City Of Tiny Lights, neo-classical pieces like the famous Peaches En Regalia, or straight-ahead rockers like Easy Meat and Jones Crusher.

Guitarist Ian Jump played some fine solos, particularly on second set opener Village Of The Sun and drummer Paul “Rhino’ Ryan impressed throughout, following in the sizeable footsteps of Terry Bozzio and Jimmy Carl Black. No less impressive were bassist Roddie Gilliard and keyboardist Phil Hearn who brought an impressive dexterity and improvisational flair to both familiar and arcane material.

Highlights of the night were I Am The Slime (I missed Tina Turner’s backing vocals but otherwise it was a great version), Cozmik Debris, the sour The Meek Shall Inherit Nothing and several instrumental medleys of early Mothers Of Invention tunes.  A version of Cleetus Alreetus Alrightus, a tune never performed live by Zappa, featured liberal quotes from the Beatles songbook - knowing where they can slip in a crafty quote is a sure sign of capable musicians. They finished with a real novelty - their own cover version of Zappa’s cover version of the Allmann Brothers Band’s Whipping Post, given new parodic life in this treatment.  Following the example of their mentor, the Muffins treat their material with respect but never with reverence.

They are up and down the country from now until the end of August - be sure to catch them if you can!