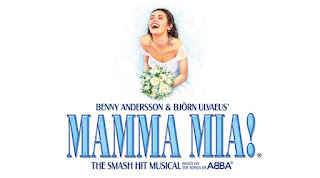 'The ultimate feel-good party' best describes Paul Garrington and Steve Paling’s production of Mamma Mia!, the world’s brightest and most exhilarating smash-hit musical which is touring internationally. The known success of this show is huge and it appeals to every kind of person. People travel from all around the world to see this musical because of its relatable and authentic characters entertaining all ages. The feeling of excited anticipation from the spectators as the band begin to play is felt through the entire theatre. It is an electrical start oozing with energy and adrenaline.

Set on a Greek island paradise, a story of love, friendship and identity is cleverly told through the timeless songs of Abba. Sophie’s quest to discover the father she’s never known brings her mother face to face with three men from her distant romantic past on the eve of a wedding they’ll never forget.

The set is simple, a moveable canvas portraying parts of the Island and simple props to help assist with each scene. It is not too complicated or too distracting but gives the perfect illusion of the Island. Overall creating a visual masterpiece. The striking lighting changes along with the bands powerful take on the classic songs is a physical phenomenon. Allowing the scene changes to happen effortlessly whilst the spectator watches on. The colours blue and white are used throughout to emphasise location, it is calming and effective, and takes the spectator away from their current surrounding and into the make believe world. And one that we are all keen to be part off. Moments happen when the stage becomes the entire theatre, everyone is putting on a show, cast and spectators alike as we try to stay sat in our seats.


The entire cast are devoted to their characters. Each and every one a wanted present on stage. The level of energy each actor brings is a solid force of talent. Actress Shona White who is taking on the lead role of Donna is out of this world breath taking. She embodies the character in every sense and is a stand out amongst the cast for her memorising portrayal. Her vocals are outstanding combined with her comic timing, raw emotion and the characteristics she uses, give White the edge on stage. The role was made for her.


This particular production exceeds all expectations and is a must see for all. The encore is a precious moment when the entire audience are on their feet dancing and singing. Energetic choreography, striking costumes and the ultimate collection of vocals, band and classic songs illuminates the whole theatre. Its a feel-good piece of Musical Theatre with an exceptional cast and crew. Mamma Mia is an irresistible play and one that leaves you wanting more. The show brings people together, spectators feel like they have something in common. In a world where everyone is completely battered by news, Mama Mia offers its audience a sense of escapism.
Reviewer - Rebecca Phillipson
on - 4/7/18