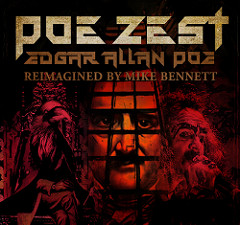 Edgar Allan Poe, the legendary American writer, was probably best known for his short stories and dark poetry – which is from where Poezest takes much of its inspiration. Couple that with the 'Gothic' nature of Mike Bennett and you have something very interesting indeed.
The set-up for Poezest is quite simple; a couple of heavy duty projectors playing the multimedia element – specifically created by Steve Bowden and Guy Cavill – and a multi-coloured light show on either side of the stage at The Peer Hat in the Northern Quarter, Manchester.
Earlier in the evening we had been greeted by two heavily made-up nurses, checking that we were there to see Poezest and that we would be downstairs in plenty of time. They were very much part of the show.
Doctor Raven was the first to enter the stage, played by the writer himself Mike Bennett. In a previous run of the show in London, this part has been played by Lanah P of Comic Strip movie fame but was unable to make it for the performances as part of GM Fringe. Bennett played the part of Doctor Raven brilliantly, portraying the dark nature of the character and with the same passion and feeling with which it was written – Doctor Raven is loosely based on Poe’s The Raven.
We met Robert Jones (Clive Jackson) very soon afterwards and were treated to a bizarre and intriguing story where he becomes an expert in the field of “nosology” – the ability for someone to be admired and revered for the size of their nose.  Bennett is using actual material from Poe, who many think created “nosology” as a metaphor to poke fun at a society that puts people on pedestals with very little reason. The story ended with Jones winning a pistol dual by shooting off his opponent’s nose – something that causes him to lose his celebrity status.  I did say it was bizarre!
Clive Jackson is absolutely perfect in the role of Jones, he was dressed and made-up no differently from his day job as lead singer in Doctor and Medics – and his natural charisma and comedic skills shone through in this production. I particularly liked his occasional interludes where he steps out of character to crack a joke with the audience – I would even have liked more of this.
More dark and bizarre themes are covered in the second half of the show with premature burials, reanimation of the dead and dark romance – subjects that Poe often wrote about in his many short stories – but this is Mike Bennett and that means there has to be a twist.  There is a twist and it caused laughter and jollity through the audience.
Edgar Allan Poe’s material has been recreated many times in the past and will be again in the future, but this is perhaps the most surreal and imaginative I have seen – it is described as “Poe remixed and re-imagined” and that is a very fitting description.
I would love to see this performed on a bigger stage, with a larger cast and a higher tech multimedia display – I hope Poezest returns to Manchester on this larger scale.  In the meantime the show runs until 21st July at The Peer Hat.