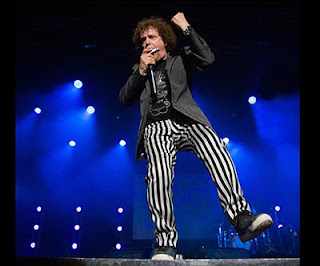 Leo Sayer began his music career nearly 50 years ago and has been performing for about 45 of those.  He started in music as a writer and it is most definitely those who write their own material that achieve such longevity.
Sayer relocated to Australia in the mid-1980s and actually became a citizen in 2009, he referred to himself on this evening in gloriously rural Cheshire as being “from Australia” despite his Sussex roots.
For those who have not yet visited Gawsworth Hall for one of their outdoor summer theatre events then you have to picture the surroundings.  Gawsworth is a small village near Macclesfield where the historic hall is situated – which has been home to the Richards family since 1962.  They have been hosting events in their garden since 1969, with a marquee erected just in front of the house where the artists perform, watched on from a large temporary grandstand which holds about 400 people.  They get the view not only of the performer but also the backdrop of the impressive Tudor courtyard and rose garden – the setting is simply spectacular.
Prior to the performance of Leo Sayer, we had the bonus of a support band.  An acoustic duo from London by the name of Wild Heart who are described on their own website as playing “a captivating blend of melodic rock, altcountry, folkrock, poprock and shades of blues” which all sounds very confusing.  Equally confusing is why they were on the same bill as Leo Sayer – something the vast majority of the audience agreed with as many of them took the opportunity to visit the bar.
After a short break, Leo and his band headed to the stage accompanied by rapturous applause and cheering from an audience of an age you might expect for a 1970s performer – a mix of those who lived through Sayer’s music themselves and those who were brought up on Leo Sayer by their parents whether they liked it or not!
Sayer kicked things off with one of his most well-known disco tracks “Thunder In My Heart” (which was re-released as late as 2006 and went to number 1 in the charts) with his trademark curly black hair still flowing as he energetically bounced around the stage.  It was clear very early that this was a man who had most definitely not lost any of his energy or his distinctive voice.
We were then treated to a number of tracks from his 1970s back catalogue with songs such as “More Than I Can Say”, “Train” and “You Make Me Feel Like Dancing” – at which point many of the audience decided to take the trip down from the grand stand to the lawn area directly in the front of the stage – something Sayer himself described as a “pitch invasion”.
The hits just kept coming with tracks such as “Moonlighting”, “More Than I Can Say”, “How Much Love”, “Long Tall Glasses” and “One Man Band” – with Sayer frequently stopping to interact with his now very close audience, at one point spotting a group who were all wearing curly black wigs and jokingly bemoaned that after nearly 50 years in the business that people only ever remembered his hair!
There was a very memorable version of “Raining In My Heart” which featured solos from most of the band at various points as well as Sayer himself on the harmonica – what was very apparent throughout the night was just how much fun they were having together on stage.  They had true chemistry which, considering Sayer had only been in the country for a week, shows how natural this clearly was.

Sayer and his band finished the set with an encore of “Giving It All Away” and “I Can’t Stop Loving You” to leave everyone in the audience very happy with the near 2 hour set that covered many of his hits – something that isn’t easy when you have such a huge collection.

The overriding memory of the evening was being able to watch a veteran entertainer having so much fun on stage and finding it difficult to believe that he turned 70 years old just a few months ago – as he exclaimed he wants to come back next year and I for one will be there.

Leo Sayer is performing at several festivals over the summer months. www.leosayer.com