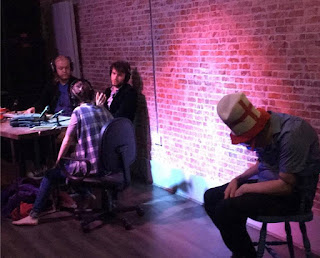 Good Vibrations is the name of a small community radio station, and the plot revolves around the imminent arrival of their Hollywood A-list film star guest who, when he actually does arrive is seemingly illiterate and uneducated. Their former guest, a well-spoken doctor has been accidentally rendered unconscious, and now it seems, so has their celebrity guest. When he wakes up however, he has gained self-worth, intelligence and a hugely expanded vocabulary.

Written by Laura Smith, who also plays one half of the radio DJ double-act, the play is utterly incredible. Don't mistake me, incredible means just that, completely beyond belief. Reality has been thrown out of the window from the start and any attempt to bring it back is negated with alacrity, as the plot just gets more and more far-fetched. A small community radio station would not attract such a star guest in the first place; but that was certainly not the only instance of ludicrousness we had to contend with.

Now all of this MIGHT have worked - and I do say might - if the cast had played their roles in the style of  the more outrageously self-effacing comedies like 'Little Britain' or 'Red Dwarf'. ie: the actors themselves are aware that they are acting, thus making it uber-melodramatic, post-ironic, and that the whole thing is something of a Mickey-take of itself. This however was not the case here, and the actors played it for real, and so the whole thing became unbearable.

A too long, boring and static exposition did not bode well. The doctor's head injury was so falsely executed and in no way would have been sufficient to have caused the trauma he seemed to have had, and a totally ineffectual 'receptionist' who, in a real-life scenario, would have had emergency protocols to follow and almost certainly an ambulance called, in this instance dithered and looked pretty!

The programme states that this is the first time that Cathouse Theatre have visited Manchester's Fringe Festival, and one can only assume that this was very much a work-in-progress and that what I saw was their first draft. I wish them well with their endeavours and re-writing.