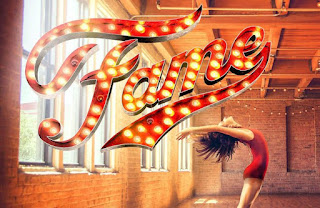 David Da Silva's hit musical about the New York High School Of Performing Arts (or 'PA' for short) set at the beginning of the 1980s has become one of those musicals which continues to endure and inspire not just those youngsters aspiring to 'fame' but to anyone who has ever had a brush with this business we call show. The themes resonate deep within us, the characters we see presented are those of either parts of our selves or people we have met along the way; and above all it shows up our creative process 'warts and all'.  It perhaps also serves to highlight a very poignant political comment about schooling in general too, since the story shows two of the school's most talented students side-lined and debased. For Carmen, this is enough to make her seek self-worth elsewhere with disastrous and tragic results, and for Tyrone, he is made to feel small and inferior, and help is offered far too late for him too, as the mental damage had already been done.Whilst poor Mabel was told that she was too fat to be a dancer. I wish I'd had a penny for every time I heard that or similar comments during my time at Drama School!

In this new touring production Morgan Large's set - an L-shaped wall of old style 10" x 8" black and white promotion photographs (the only photo accepted by casting agents, directors and 'Spotlight' even during my time treading the boards) covered these two walls - some had the names of the characters underneath, others were names I did not recognise. What was clear though was that these photos were of the correct period. The clothes worn and the hairstyles shown in each photo accurate and original early 1980s. What a shame the costumes and hairstyles of those on stage didn't match. And such large, visible and modern tattoos should also have been covered up. In front of this wall was a metal walkway with stairs. This served the base set for all scenes with smaller items being brought in each time as needed. Unfortunately one of these walls was invisible to myself and many others who were sitting on the stage left side of the theatre, and so scenes, parts of songs and dialogue was missed and unseen. Moreover, the lighting up of the photographs in various colours and configurations throughout didn't seem to correlate to the mood or action on stage and the neon strip lights used were far too bright and dazzling which meant that the LX design (combined with the set) tended to steal the actors' thunder.

In this confident and competent show which got off to a very slow and uninspiring start, we see several characters, each with their own particular problems, go through their time at 'PA' until their joyous graduation. Albey Brookes played Latino Joe Vegas more for laughs than anything, and his uncalled for cod-piece acting, despite garnering laughs from the audience, upstaged the serious story unfolding in front of him. Stephanie Rojas was Carmen Diaz, the headstrong and highly talented student who was allowed to stray down the wrong path. Coming very much into her own in the second act as she is seen after her experiences in 'LA' was both touching and real. But keeping the energy high and the spirit of Fame going throughout was Louisa Beadel as new-wave drummer Grace 'Lambchops'.

The cast were hugely talented, that much was clear, and the choreography by Nick Winston was exciting and well designed. Sadly my enjoyment was marred by the fact that my seat was right next to the speakers and so it was something akin to being next to the DJ at a nightclub as my body was throbbing with every beat and the sound subsumed me, and my vision of the stage was 2/3rds of the whole at best.

Majority of the audience however loved the show and gave it a standing ovation. It plays tonight and tomorrow before continuing on tour.