Cry For The Moon - The Little Theatre, Romiley. 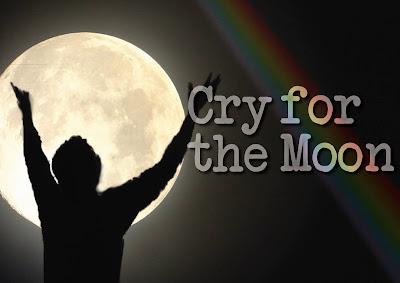 In the same week that Sir Paul McCartney recreated the iconic Beatles, ‘Abbey Road’ album cover, this new play set at Abbey Road Studios was given a pre Edinburgh Fringe preview at the Wharf, the home of Romiley Little Theatre.

Written by Jayne Marshall and directed by award winning writer, Rob Johnston, the play set in 1975 begins with a burnt-out musician struggling to record the last track of his much anticipated second album. With his creative juices running dry he is forced to confront his past when he receives an unexpected visit from a long lost childhood friend.

In fifty compelling minutes, it is gradually revealed that both the musician and his childhood friend are tightly bound by failures and secrets from the past that will unite them forever. Through flashback we get to glimpse what some of these are and see how their once strong relationship became broken.
The characters are simply referred to as Roger and Syd and on one level many who watch this engaging and hugely enjoyable production will view it is as a play about lost friendships, disappointment and drug abuse. To others however it will be abundantly clear that Marshall has written an absorbing two-hander that takes its inspiration from the story of Pink Floyd and in particular the relationship between founder members, Syd Barrett and Roger Waters. The title, Cry For The Moon, is taken from, ‘Shine On You Crazy Diamond’, which Waters wrote about Barrett.
Barrett as is depicted in the play did turn up unrecognised at Abbey Road at the recording of Wish You Were Here in June 1975. Perhaps one of the most famous and celebrated acid casualties of the 60’s and 70’s, Barrett was responsible for much of Pink Floyd’s earlier success. When dropped from the band because of his erratic behaviour and unreliability Barrett still turned up at gigs fully expecting to play.

To make the play work for audiences with either some or no knowledge of the Barrett/Waters relationship Marshall has ingeniously chosen to have the character Syd played by an actress. This cleverly distances direct comparisons but also to those in the know hints at an androgynous quality to Barrett’s personality. Rebecca Fenwick in the role gives a dynamic and spell-binding performance, none more so than when acting out a full-on LSD trip and psychedelic experience. Adam Urey brilliantly conveys Roger’s insecurities knowing that he owes his success to someone he has left behind.

Cry For The Moon packs into fifty minutes more drama and emotional highs and lows than many plays twice its length. Playing at the Greenside at Nicholson for the first two weeks of the Edinburgh Fringe a visit to see this great new play is highly recommended.