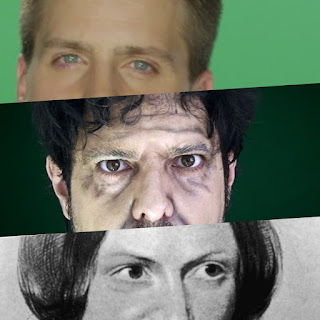 Every now and again I get on my hobby-horse and rant about the labels 'amateur' and 'professional', and the stigma the former has received over the years. The definition of these words is separated only by the changing hands of money. Professionals get paid to do what amateurs will happily do for pleasure. It has nothing to do with being more talented, better trained or elitism. And so, when Oldham's Lyceum Theatre (an amateur company) produces something for The Greater Manchester Fringe Festival (generally thought to be the reserve of professional companies - despite the fact that majority of the companies do not pay their cast or creatives for the privilege), and in so doing raise the level of the bar at least one notch, it brings out a huge and broad smile across my face!

Way back last Autumn The Lyceum Theatre held a competition for new writing. They wanted original one-act plays which had never been performed before, and the winners would receive cash prizes. This evening we were given the opportunity of seeing the winning three plays from that competition.

The first of these was 'A Good Man' by Patricia Cunningham. A man has been arrested for stabbing his brother-in-law, and here we meet him with his meeting with the probation officer who is to get his side of the story and present her report to the judge. It's a very real, perhaps too real, scenario and performed so convincingly. Sue Garlick portrays a not unsympathetic but business-like probation officer as if she had been doing this all her life, and Jon Cockroft's excellent 'man-on-the-edge' portrayal was just incredible. Posing ethical questions about our judicial system and asking the simple question, 'What would you do?' our thoughts of what is 'right' and 'wrong' are pulled and brought into question. Directed ably by Paul Gledhill.

'The Salutation' by Bob Pegg came next. A truly interesting concept which takes us back to the Manchester of 1846, and an imagined meeting and conversation between Karl Marx and Charlotte Bronte. [who did actually happen to be in Manchester on the same day!] The ping-pong like conversation between these two as they put forward their respective arguments and ideas for the betterment of mankind was excellently observed, and I found myself agreeing with both at various times. Ruth Wild was a rather supercilious but correctly-mannered Charlotte Bronte who used her wiles and whit to put Ean Burgon's blustering Karl Marx into a quandary. The weak link here (in the writing) was the maid Maggie (Bailey Mayer-Sayed). Her presence diffused the duologue and the tensions, and weakened the narrative rather than adding to it. The direction was a little static (Maggie Blaszczok), but her work on characterisation and mannerism lovely.

After a short interval we came back to watch the third and longest of the three pieces; the darkly humorous and extremely weird but compelling and powerful piece, 'Twister' by Ian Gray. A man is bungled and manhandled blindfolded into a windowless basement room by a thug dressed in black We don't know who either are or why he is there. It is only after the arrival of the third character an army major do we start to understand more - or at least we think we do. Twister is a superb title for this play, as our understanding of what is happening is even less than that of the man in the blindfold... even he is one step ahead of the audience. The ending is a piece of genius masterstroke writing, and it leaves us feeling both uncomfortable and relieved at one and the same moment. Mike Russell as Major Roscoff, Nathan Simpson as Yusef Grobodkin, and Peter Dignan as the Guard were all superb and their chemistry on stage was electric. Proficiently and sensibly directed by Ian Orry, this was definitely the highlight and a play that lingers with you long after curtain.

What a fabulous evening - and hopefully this event will open the Lyceum Theatre up to a larger and more diverse audience base; as I spoke to many people this evening who had never been to the venue before.