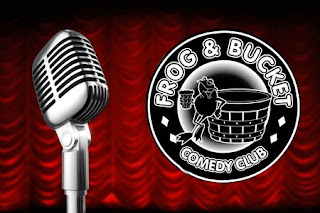 Those who experienced the home computer boom of the 1980s will no doubt remember the text-based adventure games which inevitable began with the words, “You are in a dark room,” swiftly followed by mounting frustration as you typed in, “Turn on lights,” only to be informed that, “You cannot turn on lights,” or even worse, “Command not recognised.” Australian comedian John Robertson has created a comedy show which revisits those halcyon days in his show The Dark Room.

Starting life as an interactive game via Youtube, Robertson has refined the formula into a comedy performance which brings the thrills, spills, and occasional frustration of the text-based adventure games. The show itself is an interactive adventure with audience members being given the chance to make decisions which either progress the story or result in their turn coming to a sticky end.

Robertson’s stage set up consisted of a table with a variety of intriguing props (including a pineapple – or as Robertson called it “a flamboyant potato” - and an inflatable crocodile) and a projector screen which warned the audience pre-show that “You are about to die!” Death was a frequent hazard in text-based adventures; a wrong command could see the grim message “You died” appear onscreen. Robertson has retained this aspect and amplified it to comic effect with the words “YA DIE!” filling the screen during the game as players made incorrect decisions and Robertson led a chant of “Ya die!” with the audience (audiences were also encouraged to chant along with the opening line of each turn – “You awake to find yourself in a dark room!”).

As a performer, Roberston was commanding. Dressed in a suitably gauche looking costume to make him look like a dungeon master from medieval times merged with the 1980s (spiky shoulder pads and all) shining a torch under his face to look spooky, he bestrode the stage like Gollum from The Lord of the Rings. For his vocal delivery, however, Robertson was channelling his inner Brian Blessed -and it came as a surprise to many in the audience when he dropped his ‘Dungeon Master’ voice for his natural Australian accent before the interval.

His repartee with the audience was engaging and he was more than capable of dealing with heckles from a couple of pedants in the audience.

Robertson explained the rules of the game: players would be selected from the audience (often volunteering themselves) to play The Dark Room. Anyone who escaped the room could win £1000 (no-one has done this yet, barring two people in 2012 when the prize was £50!). Players wouldn’t leave empty handed, however, as the table at the side of the stage was revealed to be the ‘Table of Wonders’ and they were given an object from the table (the ‘Wonders’ ranged from a Poundland bag to a football DVD). Robertson made sure the players would struggle to enjoy the bequeathed Wonder (the football DVD was awarded to an American couple from Seattle in the hope that they would never be able to play it because of the region encoding). As audience members were picked out to play The Dark Room, Robertson would ask what their names were and he would swiftly rename them “Darren.” To distinguish between the many Darrens of the night, Robertson would often add a word or phrase before Darren (“Resentful Darren,” “Seattle Darren,” and scoring the biggest geek points of the night, “Wesley Crusher Darren”).

The jokes came thick and fast and the options presented within the game were often primed for comedic effect. One screen offered the chance for players to ‘Check pockets’ or ‘Czech pockets’ and either selection resulted in a gag. Robertson’s often OTT delivery provoked much hilarity – at one point his voice shot up about three octaves at the end of the word ‘throw' which caused an audience member to laugh so hard and so much that they had to leave the room. Mere seconds after that, the computer programme which was running the Dark Room game crashed and an error message appeared on the screen. “I’ve broken that man and now the game’s broken!” Robertson howled with laughter as the rest of the audience fell into hysterics. Normal service was soon resumed and the final game before the interval was the ‘Democracy Round’ where the whole audience got to play by shouting for the option they wanted Robertson to select, the one with the most noise got selected.

The second half of the show was the same as the first but familiarity with the format only added to the experience as the in-jokes became clearer and the audience threw themselves into the chants of “Ya die!” In the audience were many who had seen the show before and returned for more. Given the constant hilarity of the show, it was easy to see why it was rewarded with returning audience members. For those was fond memories of the text-based adventure games, The Dark Room is a hysterical take on those graphic-less games of yesteryear. For those unfamiliar with what the show sends up, there is still a hugely entertaining and downright funny evening to be had. Highly recommended!