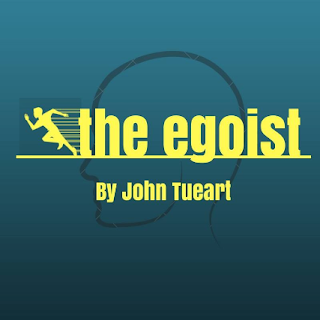 'The Egoist' is John Tueart’s second outing as a writer, following on from ‘The Agency’ which was very well received in 2017, but my first encounter with his work. This was also my first visit to 53Two as well, a small venue that is full of charm and character under the railway arches near Castlefield – it certainly won’t be my last visit.
The story follows Jake (John Tueart) and Paige (Sophie Giddens) who meet for the very first time in a local coffee shop. Jake has travelled up from is adopted home in London to see his mum, after the recent passing of his father, and needs to pass the time while she shops in Waitrose. The chance encounter with Paige as he tries to find the wi-fi password develops into a conversation which covers many topics from their childhood, jobs and most notably their shared love for films.
The third character in the play is Maggie (Wendy Patterson) who is Jake’s mother, devoted to her hard working son who has made good in the big city – according to Jake this is something she takes great delight in bragging about within her circle of friends.
The chemistry between Jake and Paige was instant and it was very clear that they are meant to be together from the moment they meet. They shared a fun night out the day after their coffee shop encounter and Jake rolls in at 2am, greeted by his mum with the offer of a brew.  He starts to tell her all about Paige – the new love of his life.
The set is simple, yet very effective. There is a table and chairs along with a sofa, both of them playing multiple roles of the coffee shop, the bar and both Maggie and Paige’s homes – the changing of roles very effectively implemented with as the lights are turned off between scenes.
Both Jake and Paige have suffered losses – more recently Jake with his father but Paige also lost her brother and this seemingly is just another reason for them to be there for each other.  Living happily ever after just seems to be inevitable, but of course that isn’t the end of things. It is when Paige confesses the circumstances of her trauma that the story takes an unexpected but gripping turn – there is already a connection between Jake and Paige but not a happy one.
My experience with fringe theatre is limited to the last couple of years but John Tueart and Sophie Giddens provide two of the most powerful and gripping performances that I have seen. The emotion and passion with which they deliver their characters are nothing short of sensational – it’s probably harsh that I have not mentioned Wendy Patterson as she was also excellent but the connection the audience felt with Tueart and Giddens was so strong and real.
The writing of John Tueart also needs to be mentioned. He has created a play that deals with relationships, love, trauma and regret – all within the space of a 90 minute performance. There is a brilliant twist in the play but Tueart still manages to keep this within the boundaries of realism and he keeps the whole audience gripped all the way until the end.