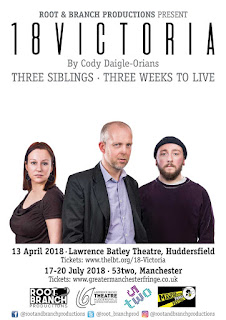 Cody Daigle-Orians’ 18 Victoria is not the sort of play to see if you are feeling emotionally delicate. Its plot focuses on three siblings – Stephen (James Nicholas), Catherine (Alex Herod), and Ben (Joe Geddes) – who are dealing with the fallout of their father’s death when the news breaks that an asteroid (named 18 Victoria) is on a collision course with Earth and that all life on the planet will be wiped out in three weeks. As a study in strained familial relationships, grief, and nihilism, 18 Victoria is highly effective, wisely lacing the bleakness around some gallows humour to bring some relief from the encroaching doomsday which our characters face.

The production at 53Two relied on a minimalist set: several large blocks which were placed around the stage and were used by the cast to either sit on or walk across. At the front of the performance area lay scattered rubbish, presumably added to give the air of the play taking place in a wasteland as society breaks down, although the detritus wasn’t particularly visible from beyond the front row. It did feel somewhat unnecessary; the bare bones set didn’t need the addition of strewn rubbish at the front.

This, however, was the only aspect of the production which wasn’t effective (and even then, it is a bit of a ‘nit-pick’). Everything else, the script, performances, and even live music (courtesy of Stefan Melbourne, aka We Were Strangers, who provided a suitably mournful soundtrack to the events unfolding onstage) was of a high standard. The play is structured around interlocking monologues from each of our protagonists, although there are some occasional moments when the characters engage with dialogue with one another. The three performers breathed life into their roles: Geddes’ Ben, the youngest of the three siblings, is openly gay, fuelled by nervous energy (and cheap noodles), and he really, really wants his dad’s Encyclopaedia Britannica set. Catherine, the married, no nonsense, middle child, is given heart and soul by Herod. Lastly, there is the eldest brother, Stephen, who left home at sixteen, cynical, distant, and determined to see oblivion in by being so drunk he won’t feel a thing. Nicholas’ performance as Stephen was astonishing; he delivered his often blackly comic lines with aplomb.

Given the monologue based nature of the text, it could have been easy for Julie Root, the director, to feature the three performers just sat facing the audience as they delivered their speeches. Wisely, Root eschewed that choice in favour of having the actors move around the performance space and the actors who were not speaking sat down or moved from one block to another and were still in character, they were thinking, drinking, checking their phones for updates on the arrival of the asteroid, but without pulling focus away from the actor who was explaining how their character was coming to terms with a world that was facing its end: Stephen finding solace in drink, Ben in casual sex, Catherine attempting to maintain a façade of normality for as long as possible. All three characters describe a memory of an evening from when they were younger, when Stephen told them to pack their things and leave home with him to go to Antarctica. These sequences featured all three actors walking around the set with backpacks and torches and provided an interesting visual break in the play, as well as building on the backstory of the characters and why their relationship with their parents, as well as each other, was so strained. The revelation of what provoked Stephen’s decision to leave his family as soon as he could was shocking, although it could be argued that the explanation was unnecessary as, sometimes, things just happen in life with no reason being given.

The climax of the play, nonetheless, delivers an emotional gut-punch. Of note are Herod’s final moments as Catherine, facing the end of not only the Earth but the world she had built around herself. Herod managed to convey Catherine’s emotional turmoil effectively without having to resort to histrionics. Geddes and Nicholas also excelled in their final moments, finally meeting by their father’s grave, after so many years apart, to see in the end of the world together. The play avoided the cliché of the asteroid avoiding hitting the Earth and instead the audience witnessed the world’s end with the characters, thanks to a hugely effective use of lighting and sound effects. As Melbourne played his guitar and sang following the play’s end, there was no doubt that many in the audience had been emotionally gripped by the production.

Root & Branch Productions have certainly created an astonishing piece of theatre with 18 Victoria. It’s not the easiest play to watch, given its emotional rawness, but it deserves to be seen by as wide an audience as possible.