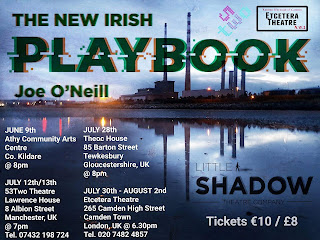 Irish company Little Shadow Theatre have travelled all the way to Manchester to perform for the first time as part of the Greater Manchester Fringe Festival. That, in itself, is a daunting enough task surely... but no, instead of bringing over just one play with just a couple of actors, they bring 6 plays and 7 performers! But before you think that the evening must have gone on forever, the plays were all performed within the space of 60 minutes!

With all 6 shorts written and directed by the company's Artistic Director Joe O'Neill, who also is one of the actors too - you could be forgiven for thinking that this might come across as egoistic; an event all for his own self-glorification. However, that did not seem to be the case at all, and the company worked excellently together and there were absolutely no visible egos!

As for the writing, then I found the four in the middle to be the most secure and mature, whilst the two outer shorts were less successful.

The first, 'Coming Out' had a lovely premise, but the direction made it disjointed and the tag-line, a nice one, came too late. The last, 'In The Garden Of The Engagement', the duologue took too long to get into top gear. It was a clever idea, but too diffused and lacked focus and again went on for too long.

The middle four however were very good indeed.  In 'Twenty Minutes Waiting' we see a young unmarried couple who have been living together for some time. The ease in which their arguments and bickerings flare up, and the lovely chemistry between the two told us this much.  However, this time when she comes home, she believes she is pregnant, and this puts the cat among the pigeons. They wait for the pregnancy test to give the result.....!  A new look on a familiar scenario.

'Ignorance in Riches' was a surreal and almost futuristic look at pregnancy. A young couple with a baby almost due are chatting with their doctor. All is going well until the doctor tells them not just the gender of their baby, but also his name. And as the doctor seems to know far more about the future of their baby and their lives than they do, the couple become both more curious and interested but also more nervous and insecure. Again, a brilliant tag-line which I won't spoil.

The other two were monologues. Both super characterisations, but I did think the first 'I'm The Hero' performed by Adam Tyrell the stronger and more complete than the second, 'Ignorance In Riches', performed by Joe O'Neill.

All the plays had a solid and believable start, and then all drifted off somewhere into a creative and playful fantasy land which, if O'Neill wanted to lengthen the plays, and develop them further, this has given him licence to do so.

Verdict: A very pleasant hour spent in the company of our talented near-neighbours. Gentle, sometimes surreal, comedy performed by an accomplished company of young performers; and so lovely to welcome something to the Fringe that hasn't emanated from Greater Manchester.