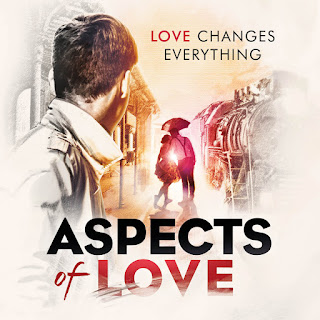 Hope Mill Theatre and Aria Entertainment's latest co-production / collaboration is the Lloyd-Webber Musical, Aspects Of Love. With lyrics by Don Black and Charles Hart, and based on the novel by the same name by David Garnett, it is not one of Lloyd-Webber's more popular shows, but it is certainly one of his most 'adult', and this is a highly competent and very enjoyable interpretation of this show.

Spanning 17 years, the story revolves around actress Rose Vibert (Kelly Price) and her romantic entanglements over the course of these years, from fan to jilted lover Alex (Felix Mosse), his uncle George (Jerome Pradom) whom she eventually marries, and others such as fellow actor Hugo (Jason Kajdi); and the romantic entanglements of those Rose herself becomes involved with... George's Italian lover, Giulietta Trapani (Kimberly Blake), and Rose's daughter Jenny's (Eleanor Walsh) crush on Alex. In fact it is almost fair to say that everyone loves everyone at some point in the story...!

But this is not a comedy, no, this is a tragi-romance, and the story is set firmly in a world where such dalliances are accepted and understood; a world of post war France and Italy.

In a nutshell, Alex sees Rose perform, goes backstage to meet her and kick-starts a chain of events which sees him starting a tumultuous affair with her and then having to leave to serve military conscription. During this time, Rose finds love and romance with Alex's uncle, George and they live together for several years, despite George's affair in Italy with Giulietta Trapani, and despite Alex coming back to almost put a spanner in the works. Rose marries George, they have a daughter, Jenny. At 15 Jenny and Alex believe they are in love, but, at George's funeral, Alex meets Giulietta, and again changes the course of affections and dalliances...

It's a wonderful musical with a sweeping, lyrical score full of poignant and emotive motifs, and brings out the Romantic in even the most hard-hearted of us. We are swept up in this journey where all the characters all too easily wear their hearts on their sleeves and seem incapable of resisting the carnal urge. No-one can blame the young Jenny for falling in love so young when she has been brought up in such an atmosphere.

The set (Jason Denvir) was good but not optimal. The general overall 'feel' being very Mediterranean with wisteria hanging from the ceiling and the wooden-slatted panels and doors favoured by such a clime; however, it was not specific enough and a Paris apartment or a train station it certainly wasn't. I also found it quite odd that the paintings of Pau, Venice and Paris, which clearly were intended to indicate to the audience exactly where the action was taking place, did just the opposite. Pau was omnipresent, and Paris was there when we were in Pau etc..... very confusing! Further, when action was taking place beyond the rear doors (the stage scenes and especially Alex and Jenny's final duologue), they were partially hidden from some of the audience.

It was the intimacy of the set which was most impressive. With the front row of audience on cabaret-style seating, and part of the set extending beyond this into the audience, such as the hat stand, this was  a master-stroke and it is what Hope Mill can do with aplomb, setting them apart from places such as The Palace or Opera House where such intimacy is impossible.

Musically very secure under the direction of Gareth Bretherton, but I was longing for a fuller, lusher sound. just two pianos and a few drums simply didn't do it for me. The story, the love, the romance, the heartbreak, the whole gamut of emotions was crying out for a few strings and some basso profundo. Musical highlights such as the haunting 'Falling' quartet and Rose's heart-wrenching 'Anything But Lonely' were superb. Pradon's touching rendition of 'Other Pleasures' also excellently measured, but the showstopping number must surely be 'Hand Me The Wine And The Dice', where Blake's singing and the brilliant choreography (Sam Spencer-Lane) combined in total harmony to spectacular effect.

Directed by Jonathan O'Boyle, the danced silhouetted scene changes worked excellently and imaginatively. Creatively and solidly directed throughout, with just the right amount of humour (or should that be 'bonhomie') prevailing.

This evening though it was very much a case of the actresses outshining the actors in this show. Blake's Guilietta Trapani was sublime, and Price's Rose, stunning. Both gave absolutely secure and bravura performances. Walsh's Jenny was also excellent as she was a convincing 12 year old growing into a blossoming and mature 15 year old, totally believable with an easy stage presence. And considering the action of the musical takes place over a 17-year period, the only one to truly age, and do so so easily and naturally, was Pradom's George. Mosse (Alex) looked a very young 17 years old throughout! However the chemistry between the cast was palpable and believable.

A hugely enjoyable, proficient and worthwhile evening's entertainment with some very strong performers and catchy, memorable melodies, proving their point that Love really can change everything. 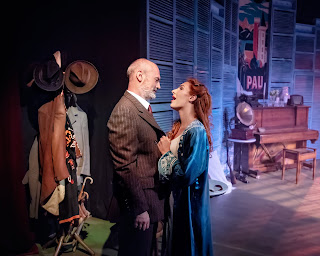