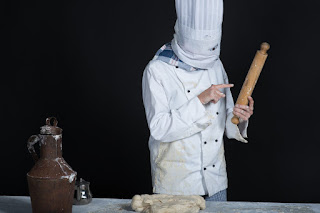 Helen Ainsworth has created for herself an absurdist alternative world of what she describes as 'object manipulation'. Between Ainsworth and director John Mowat, they presented a one hour show in which Ainsworth, dressed as a chef, complete with stereotypical hat, but quite disturbingly is also covering her entire face with a 'mask' which has only two tiny holes for the eyes whilst the rest of the face's features are seemingly drawn on in pencil.

She then preceded to tell a very dark and rather disturbing story about Janet. First of all we are introduced to a bag of flour, French flour no less, and a sturdy antiquated jug (which, according to the flyer is a 1950s milk churn). These two objects are Janet's parents, and Janet is created by a highly sexualised spreading of flour and water from the jug.

The voices are all created by Ainsworth who is a capable 'puppeteer' here, giving these and other objects interesting characters and voices, as we follow Janet's story from conception to becoming a large lump of dough. Her destiny however, is to go into the oven and become bread. She refuses and rebels, and the story becomes much darker as there are suicides and killings. Baking it seems, can be a deadly business! And the almost too ironic to be true ending was definitely worth waiting for.

There are though a couple of problems inherent with this piece. The first is Ainsworth's mask. It is not right at all; I don't know what would have been right, but I know that that wasn't. I think it would have worked better perhaps without any mask, as my second problem is that Ainsworth herself also becomes part of the narrative and speaks to the inanimate objects as a real person... which, given the premise that her mask is supposed to hide her and keep her anonymous and 'be' the voices of the objects, seems wrong.  However without the mask, she is a cook, and can therefore legitimately speak to her utensils.

The show is also too long; even at an hour. There are some truly lovely moments in this show, which could have been developed further. There are also too many 'characters' - some brought in for seemingly no other reason than to showcase Ainsworth's talent at 'object manipulation'. For me, I would most certainly concentrate on the darker and more powerful aspects of this 'play'. The sex is deeply weird and darkly comic and needs to be kept in, as do all the deaths... but losing a lot of the peripherals will help to both streamline the story and make a more disturbing piece of theatre, which I do believe is what this piece needs.

Verdict; an interesting and totally unique piece of theatre which needs to be seen to be believed, but lacks focus and needs further development.