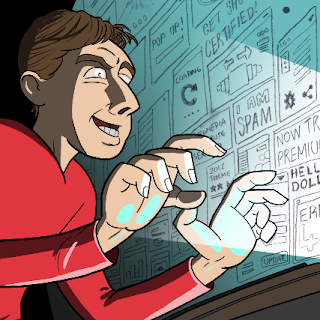 John Cooper is probably best known for his work as comedy character Danny Pensive (who describes himself as a “professional idiot”) for which he has received critical acclaim, so I jumped at the chance to see his latest show ‘Confessions of a WordPress Fanatic’.
Cooper describes this show as a “comedy experiment” as he moves his stand-up routine into the area of comedy storytelling and although this is his first venture into this area, there was little evidence of this as he came across as a ‘seasoned pro’.
The subject matter for the show is WordPress – which for those who are not aware is as Wikipedia describes it “a free and open-source content management system (CMS) based on PHP and MySQL”.  In simple terms WordPress is the world’s most popular software for creating and maintaining websites – the popularity being mainly due to the fact that it is free but also the fact that it is easy to use, they constantly release new features and updates and you don’t need to be a computer genius to create a very professional website.  More than 30% of all websites out there on the internet are created using WordPress.
Cooper tells us about his experiences of meeting Mike Little, one of the original founders of WordPress, at a convention in Manchester where he asked for volunteers to do a short talk on their experiences.  Despite being something of a novice, Cooper had been so surprised by Little’s welcoming nature that he accepted the challenge and prepared a 15 minute talk – although he later admitted that his natural desire to reach a new audience as a comedian was also partly responsible.  It was during the 15 minute presentation, not intended to be at all funny, that Cooper realised he had stumbled upon a new show.
On the face of it this subject would appear to be a very niche area, appealing to web developers and website designers but that simply isn’t the case.  John Cooper is a natural storyteller and the way he navigates through his experiences without complication is brilliant.  He avoided using any technical buzzwords and focused on his hilarious stories which just happen to be about using website creation software.
John Cooper has added a new date for this 1 hour show on Sunday 29th July and I urge both users of WordPress and those who have no idea what it is to go along and listen to a man who is clearly destined for greater things in the world of comedy.