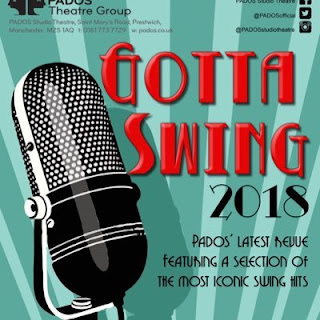 PADOS Studio Theatre is Prestwich’s hidden gem, nestled next to St Mary’s Park. Their 60 seat bijou studio theatre is an Aladdin’s cave of what can be achieved theatrically in a minimalist space. Originally, a civic library now a theatre with a thriving junior and youth section which performs a full season of plays, reviews, pantomime and a full musical at nearby Bury Met Theatre when 60 seats simply wouldn’t be enough.

Tonight’s performance was a nostalgic visit to the 1940’s swing era and did not disappoint. The set was stunning – thanks to the creativity of stage manager Santi Paradeda and his accomplished workshop team.  Beautiful white, sateen drapes and an Art Deco style thrust pieces formed the flats with a reflective detail on the stage floor really set the scene.  They used a raised platform upstage which was made from a keyboard set of black and white keys. Very impressive. Rear curtains upstage were provided via fringed lampshades suspended from the ceiling – just so impressive.

Director and lead singer Simon Fletcher has again achieved a remarkable piece of musical revue which had the audience singing along and feeling nostalgic for a time of beautiful, memorable melodies and lyrics to match backed by big band sounds.  The music was provided by a range of backing tracks – some with full orchestration and others bare accompaniments which needed secure singers with strong musicality.  PADOS had plenty of these.
The opening was slick and stylish with the boys in their dinner suits and the girls looking beautiful in sassy black outfits.  The choreography throughout was well thought out and executed and all dancers were clearly secure in their performances of Helen Marland’s movements. Helen herself showed that she still had it in a couple of numbers as a feature dancer showing her experience and stage presence.
Charlie Lewis demonstrated her dancing talents as she lit up the stage with her beautiful face and lithe movements.
There were so many musical numbers throughout the evening that took us on a journey through solos, duets, group numbers into a fast and well linked finale.  We particularly enjoyed Simon Fletcher’s “Teach Me Tonight.” That boy can sing and reminded us of a young Frank Sinatra. Great control and he knew exactly how to play his audience.  The other ‘ boys’ gave sterling support and each shone in their own numbers and had a variety of tones but all blended so well together.  The highlight of the evening was ‘King of the Swingers’ with the boys having so much fun and business together with their snazzy animal print ties.  David Glynn-Whitehead’s smooth tones were like liquid gold and his effortless crooning suits this musical style so well.
Amanda Ernest performed a sultry comedy number “Whatever Lola Wants” which the audience fully enjoyed and appreciated her seductive singing – especially the bar tender who was enthralled with her assets.
The girl dancers ably assisted lots of the solo numbers and sashayed around the set adding colour to the singing. They all had beautiful costumes and smiled and danced and enhanced the production every time they were on stage. They had a cheeky little opening to Act 2 in Minnie Mouse style outfits to raise the mood and the tempo of the show.
Esme Mather gave us a striking rendition of ‘Let’s Do It’. She sings so like Etta James and her facial performance is mesmerising to watch. She also duetted with Abi Henry in ‘ Sisters’ which was fun and very well performed, well balanced and acted. They looked great in their sparkling fishtail gowns too. Great work by the girls. In fact, the whole cast coped so well with the very tight space on stage and made it look effortless even when a quarter of the space was occupied by the bar tender’s ‘ bar’ complete with glasses, alcohol and bottles. Nice business al evening from Gary Griffin as bar tender with his cheeky face interacting with the singers.
The girl singers really came into their own during the high energy “Woman” with four soul divas strutting and making it their own. Well done ladies. I loved it. More sass than you can shake a stick it!
The climax of this spectacular evening was the whole group of male singers entering the space with floor mics and performing a harmonically balanced “My Way” which blew the audience away: as the applause died away this number segued effortlessly into a whole cast finale full of red sequinned costumes and bright, energetic singing. Simply spectacular.
Congratulations to the whole cast and production crew. This is PADOS’ 100th year and this revue ends their season on a high. Enjoy the rest of your performances.  Get a ticket if you can.
Reviewer - Kathryn Gordon and Jackie Holt
on - 18/7/18
at July 20, 2018