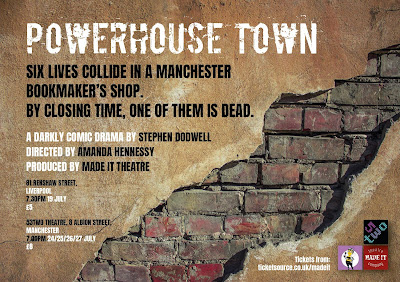 Produced by Made It Theatre Company, Stephen Dodwell’s play, Powerhouse Town, is a masterpiece in theatre writing. Skilfully directed by Amanda Hennessy and expertly performed by a confident cast of six.


This one hour play opens with Bob The Taxi (Pete Gibson), an Elvis-loving taxi driver who, by way of a scene-setting monologue, quickly eased the audience into what was to come. An unassuming betting shop soon became the platform from which our six characters’ paths crossed.


Dodwell’s writing was intriguing, contemporary, lyrical and pacey. There is a meter and rhythm to his writing that is akin to a modern day Shakespeare. Each character steps onto the stage and spews out an inner monologue that is loaded with personal imagery. Imagery that resonates in such a unique way that it felt like you (the audience) were eavesdropping on someone’s secret world.In doing this, the audience connected with the characters from the inside out. (As opposed to a more traditional audience experience of identifying with a character due to a personal plight or emotional occurrence, shared with us.)


There’s no getting away from it, this is a very ‘wordy’ play that demands a lot of ‘listening’ by the audience. I found that the text was enhanced by Hennessy’s decision to strip away any distractions such as set and props. The bare stage with just six plain boxes on, was one minute a taxi and the next the desk of a bookies, which allowed the ear to truly enjoy the dialogue without visual distractions.Moreover, each character was dressed in a simple boiler suit in a different colour per character. This simplicity added to the desire to ‘hear’ the play and be mesmerised by each actors’ interpretation of that role.


The four male characters were highly identifiable working class men with both an interesting and palpable bond between them. I found the female characters slightly difficult to identify with, in the same way as I often find some of Shakespeare’s female speeches aren’t quite in the rhythm of women’s speech patterns. The two female characters, whilst being very interesting, felt extremely isolated and disconnected from each other. As if they were there merely to assist in the exposition of the male roles, rather than being essential and justified entities in their own right.


Apart from Eileen (Ann Brown) who works behind the counter of the betting shop, the only other female character, Karolina (Marcy Hazell) is from Eastern Europe, making her feel like the odd one out which, perhaps intentionally, added to the alienation of being a ‘foreigner’. Her alienation made me question why this character was necessary in the first place and highlighted my sense of the writer ‘gagging’ the female voices. Despite this, the acting is tremendous and the cast expose the humour in the text naturally and beautifully.

Another fabulous element to this play was the musical moments. One minute Bob was being Elvis both in speech and song and the next, John (Trevor Dwyer-Lynch) and Billy (Antony Bessick) were belting out a politically pertinent ditty that married with the themes of their characters - a la John McGrath’s Scottish left-wing agitprop theatre group 7:84, that dominated political theatre from the 70s onwards.

Culminating in Mark (Mark Patterson) crudely attempting to rob the betting shop with a hammer as his preferred weapon of choice, the result was a verbally and physically raving Mancunian who stepped into the light of a Hacienda-like club and gyrated to a rave beat. Genius!


I truly believe this is a ‘must see’ play, performed in a winning style.