How To Survive A Zombie Apocalypse - King's Arms Theatre, Salford 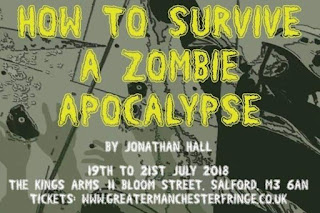 With a title like How to Survive a Zombie Apocalypse, you might be forgiven for expecting a Walking Dead-style, post-apocalyptic drama. Instead, Narthen Production’s play, written by Jonathan Hall, presents an episodic drama which explores the friendship between 52-year-old teacher and Deputy Head Phil (Tobias Christopher) and the 29-year-old climber and zombie film enthusiast Mark (Lee Petcher). While there are helpful hints on how to survive a zombie apocalypse (“Don’t go it alone,” to give one example) projected between scenes, said zombie apocalypse is actually an extended metaphor for life, love, and complicated love-lives.

The production, solidly directed by Andy Pilkington, made use of a minimalist set, with a couple of blocks which were reconfigured depending on the setting (a bench, a bed, or removed altogether). Short videos were projected before each scene which displayed the rule for surviving the titular apocalypse as well as providing a sense of setting for the upcoming scene: a train station or the landscape of the Lake District, for instance. The videos also had the additional function of covering the scene changes; the episodic structure of the piece meant swift changes in locations and time, and a small backstage crew worked swiftly to get the changes done in the time the videos played.

The play’s eight scenes presented audiences with a snapshot of the developing friendship between its two characters. Phil is on a school trip at a climbing centre, stuck at the top of a pole and in the throes of a panic attack when one of the centre’s employees, Mark, manages to calm him down and encourages Phil to face his fears. From this opening scene, the two meet again and strike up a friendship – both men enjoy films with a science-fiction bent, for Mark it is zombie films while Phil prefers his sci-fi with less undead and more eeriness, namechecking The Village of the Damned and the 1961 British sci-fi film The Day the Earth Caught Fire. Mark opens up about his relationship with Michelle and reveals to Phil that they are ‘on a break’ as she really wants children and yet Mark feels uneasy with the notion of parenthood. Phil, meanwhile, is in a long-term relationship with Patrick but the excitement of the early days has been replaced with a more mundane lifestyle or, as he puts it (via one of several sparkling lines in the play), “You start off with Heathcliff and end up with Homer Simpson!” After a brief, drunken kiss, the two men decide to put that incident behind them and Mark encourages Phil to tackle the lengthy walk around the Old Man of Coniston. Soon, though, their friendship becomes more physical and Phil feels conflicted between the excitement of a relationship with Mark and his comfortable life with Patrick.

As Mark, Petcher brings a certain geeky enthusiasm when talking about his love of zombie films and provides some nice comic touches to the wittier lines in the script. Christopher’s performance as Phil worked best during his quieter, more philosophical moments, in some of the more emotionally charged moments he did seem to shout and over-emphasise more than was perhaps necessary. Of note was the moment where Phil points out to Mark that life wasn’t like a neatly structured zombie film with order, disruption, and resolution but that it was a constantly chaotic mess. Here, Christopher brought a sense of “having learnt this lesson the hard way” to Phil and it was very effective.

How to Survive a Zombie Apocalypse is a solid production which does provide some nice wit and humour amongst the emotional turmoil. With an additional draft or two of the script, it could become even better. More could have been made of Mark’s decision to instigate a more physical relationship with Phil – was it out of loneliness, curiosity, or was it just a reflection of the (so-called) ‘millennial’ generation’s more open attitude to sexuality (where the traditional binaries are situated on a fluctuating scale)? It would also have been nice to get more of a flavour of how Phil felt about his changing relationship with Mark, as it was, their physical moments together were brushed away within a few lines. Nevertheless, the play was enjoyable and was solidly produced, acted, and directed. If Narthen Productions want to develop the play further then a redrafted script with more emotionally charged material would give the actors more to get their teeth into and give the audience a real sense that, by the end of the play, the characters have truly survived a zombie apocalypse, metaphorically speaking. As it stands, the show is a charming, often witty, story of friendship and love and that is by no means a bad thing in these often-fraught times.