In The Heart Of The Wasp's Nest - Salford Arts Theatre, Salford. 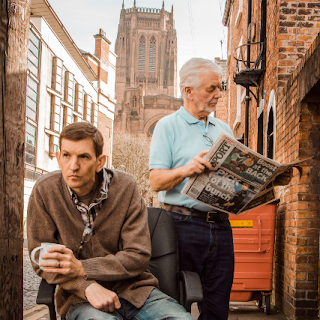 In The Heart Of The Wasp's Nest {shouldn't that be 'Wasps' Nest?} is a play set in a failing, and somewhat behind-the-times Liverpool Fashion college; more specifically, the Technical Support Staff's room

The writing, (Karl Falconer and Natasha Ryan), is full of mixed styles. One minute it is an hilarious slap-stick comedy and the next we are into tragi-drama territory. The main stories (or themes) of the play are that of 'change will happen' and sexual misconduct in the workplace, however both of these ideas are diffused and not taken as seriously or as in-depth as they could have been since there was far too much preamble and periphery. Despite the writer drawing from personal experience, the narrative is clumsy and there are too many characters which are left on the sidelines under-developed. It was very much like watching a Brookside omnibus on TV!

Norman (Simon Hadfield) and Frank (Jonny Black) are the school's techies and have been there all their working lives. They represent the old, the firm, the fixed. And along with security guard Alan (Tim Swinton) are the dinosaurs which need replacing to face a new technologically advanced era and one which will be brought about by a woman, Angela (Christna Sedgwick). The old-school brigade are very un-PC [a deliberate pun] - they are both not modern computer savvy, nor are they politically correct and jokes against women and words like 'golliwog' form their day-to-day life.

These are the realities of the world we are being shown. Enter Carol (Natasha Ryan), straight out of college herself and given her first job as technical support worker and dumped into this atmosphere. Her pluck and humour see her through and she wins the men over. So much so that perhaps Frank, fuelled by alcohol at Alan's leaving party, gets a little over-friendly. Whatever the case, Carol accuses him of touching her sexually, and the real drama of the play starts to unravel. It takes a very long time to get there - too long - and the conclusion was also somewhat unsatisfying.

In order for this play to really pull the punches I think it wants to, then I would certainly suggest doing away with the silly office practical jokes, and the banal humour and stick to streamlining the script in the direction of serious drama. Taking away a few extraneous characters would also help. A homosexual lecturer, an unmarried pregnancy, and other 'issues' which perhaps encountered in real-life, can be omitted and put on one side for a future play. There is too much going on here already.

If this play was indeed inspired by the #MeToo campaign, then surely it is worthy and something that there should be a play about. In this evening's production the acting was generally very good, and the characters believable and interesting. The complexities of Frank and Norman - their social and political beliefs and old-school humour pitched against Carol's 'modern liberalism' was handled well, and indeed this is the central point from which everything else flowed (or at least, should have done). The directing however was slow, [why did we have video footage playing of a Liverpool of yesteryear and political debates featuring Margaret Thatcher when the action was set in the present? - this served only to diffuse things even more], and the story needed a rocket behind it! Majority of the first act could easily have been cut without losing anything of the story or the build-up.