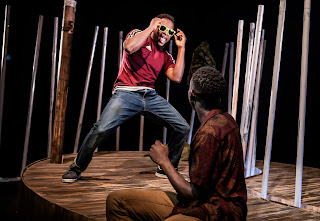 The Fishermen is a dark and often bewildering story of two brothers in contemporary Nigeria. Originally a novel by Gbolahan Obisesan, and now adapted for the stage by Chigozie Obioma, it tells the story of two brothers, and their formative years in the 'lawless and corrupt land' of Nigeria.

We first meet the two brothers on opposite sides of a prison fence. The time is the present, and Obembe has come back to visit his imprisoned brother, Ben. Through the following 80 minutes we are taken on a very personal journey through these brothers' lives as they re-enact their memories and swiftly and seamlessly become the other characters in their narrative.

We learn about the way the country is run, their parents and how they fit into the Nigerian landscape, their beliefs, and most importantly their superstitions. For it is these that, even at only 10 years old, lands them into big trouble. I do think that if one already has some knowledge of the customs, traditions and lifestyle of Nigeria then they would come away with a lot more from this play than I did - however, it was a fascinating and somewhat frightening introduction for me.

The set (Amelia Jane Hankin) is a clever one. A circular central dais with blackness all round (a nice visual metaphor) with a row of poles dividing the entire stage in half. These are used at various points in the story for weapons or fishing rods and the removal of the central ones at the end again served as a lovely visual metaphor for the brothers' actions and emotions on stage. Combine this with creative, effective and mood-full lighting (Amy Mae) and sound (Adam McCready) and it became one of the simplest but most effective designs I have seen in a long while, and the whole worked wonderfully.

Working together superbly are Michael Ajao as Ben and Valentine Olukoga as brother Obembe. Both are highly talented actors, and there was a sparkling chemistry between them which only siblings can have. There were though, two slight problems for me. First was the comprehensibility. They had chosen to speak their dialogue using a strong Nigerian accent, which, when characterising some of the people, became even stronger. I was, as I always like to do when possible, sitting on the back row in HOME's Theatre 2 space, and since some of the projection was not always direct or fully enunciated, I did miss some of words. My second slight problem was that there were also times when the change from one character to the next was so slight I was not able to understand exactly who it was that was talking. Some characters were given a big and obvious change - these worked by far the best for me, and I also enjoyed the clever way that one actor metamorphosed into the character being played by the other actor, or they became the animals in the story too. Very slick, very clever - but on occasion the change was minimal and it took me too long to work out who it was that was speaking, by which time it was too late as the narrative had moved on.

Nevertheless, the production proved to be both a dark and forbidding insight into Nigerian culture and a beautiful portrayal of brotherly love and family bonding in the age-old saying of  'time heals all wounds'.