In The Heights - Grange Theatre, Oldham. 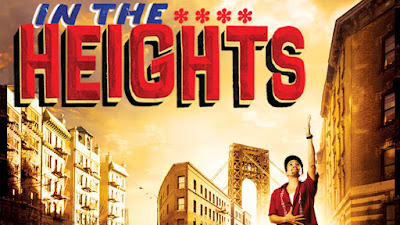 For a huge Musicals fan such as myself, it has taken me a very long while before watching this now rather iconic and ground-breaking Musical. Conceived and written by Lin-Manuel Miranda, who has now gone on to achieve world-wide recognition with 'Hamilton', this is a very bold, confident and genre-bending piece which Miranda originally played the lead role himself in.

The 'Heights' of the title refers to that immigrant district of New York called 'Washington Heights', which, at the time of writing this Musical was a vibrant and bustling hive of Latin Americans, especially those from the Dominican Republic, and this musical cleverly and seamlessly fuses those wonderful Latin rhythms with more traditional Musical Theatre music with a whole dollop of rap thrown into the mix too. The music is as eclectic as the characters who people this score.

The story is set over a three-day period in one of the hottest spells ever. [a little like England now!], and revolves around three shops and the owners / workers and customers of these. Our narrator and protagonist Usnavi [apparently so-called because his father saw the words US Navy on a passing ship] owns a small 'bodega' [what we would probably call a Newsagents], whilst his next-door neighbour's Hair Salon is run by a somewhat neurotic and dramatic Daniela. It is one of Daniela's employees however, Vanessa, whose beauty attracts the whole male neighbourhood, who sets her sights on Usnavi and their relationship forms one part of the narrative. Another story concerns the daughter of Rosario's taxi firm, Nina. She comes home from college - the first and only one in the area to 'make good and get out'. However she is a drop out and has come home with her tail firmly between her legs. This is a huge disappointment and embarrassment for her father Kevin, but her more pragmatic mother, Camila, tries to pour cream onto the wound. There is one other big obstacle to get over though where Nina is concerned; she is in love with Caucasian employee of the firm, Benny. Once again the parents are up in arms, but will love stay the distance?

Subplots involve the 'grandmother' of the neighbourhood, 'Abuela' Claudia, who looked after Usnavi after his parents' death, the discovery of a winning lottery ticket, and a no-good bum graffiti artist turned nice-guy!

The promotional blurb for the show says that it is a musical about home, family, and finding where you belong. I would say it offers more than that. It shows, that despite all hardships and setbacks - of which there are many - there is always hope. Hope of a new beginning, hope of things getting better, hope of love flourishing, hope of peoples coming together and forgetting race, prejudices and petty jealousies; hope of a better tomorrow.

In this production - an amateur youth production, presented by North West Theatre Arts Company (NWTAC) - I was utterly bowled over by the energy, commitment, professionalism, and talent on display. Adam Whitmore played Usnavi with a confidence and presence way beyond his years and was a likeable and very watchable performer. Tempany Windsor was Vanessa, and her sassy swagger and amazing voice made her the perfect partner for Whitmore. I was a little confused as to why no effort at all had been made to hide NIna's (Kate Bannister) obvious pale white skin and long blonde hair - this looked wrong - but her characterisation and lovely singing voice made up for this. Whilst Reece Challinor was the young and driven Benny. These four super protagonists were more than ably supported by a hugely talented cast of minor characters, dancers and a chorus. The chorus singing - including harmonies - was stunning, and the movement / dancing was very good.

The small cameo of The Piragua Guy, played with a continuous and optimistic smile on his face and a beautifully sonorous voice by Liam Watson was a joy.

Combine this youthful creativity and energy with a well designed and evocative set, arty lighting, and sensible directing, and NWTAC have created a vital and surprisingly mature show which is both credit to them and deserving of wider recognition. It also proved to be an excellent introduction to In The Heights and Miranda for me. Next stop, Hamilton!