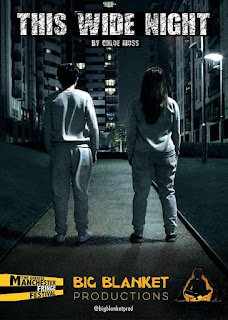 This Wide Night by Chloe Moss is a two-hander in which we see ex-cons and former cell mates Lorraine and Marie trying to navigate their way on the ‘outside’. Set in the Vaults at the Kings Arms and directed by Amy Liptrott she could not have chosen a more perfect venue for this intimate look at the lives of these two women. The whole action takes place in Marie's ‘studio’ flat which, as Marie points out, is merely a fancy way to describe a bed-sit.

The set is minimal and yet cleverly done so that we immediately feel like voyeurs, not only due to the intimate nature of the venue but because it is clear the actresses are immersed in their environment.

Initially I wondered whether the decision to leave the exit door open would serve as a distraction but I was so drawn in to the space that I quickly adapted. Marie, played by Stevie Skinner is already in situe as the audience filter in awaiting, as we soon discover, the arrival of Lorraine played by Amy Forrest who bursts in with a kind of nervous frenetic energy which she maintains skilfully throughout. We soon discover that the women were cell mates in prison who have not seen each other since Marie stopped visiting after she was released first. Forests’ energy was not entirely matched by Skinner who seemed a little too relaxed given the stakes, although maybe this was a purposeful decision to impose some juxtaposition in the characters.

Both actors delivered the script with perfect pace and impeccable timing particularly on the humorous one-liners, of which there were many. Whilst the comedy was deftly delivered it did not quite achieve the level of pathos I thought it required, and as such I struggled to emotionally invest in the women. There are some heart-breaking monologues and climactic moments which just fell short of where they should have been to really have had an impact on the audience.

The piece is gritty and raw and at times I felt it was played a little too safely. In one section Lorraine frightened Marie by becoming aggressive, but the underlying threat of awakening the beast inside her which is capable of murder was absent, and so the moment fizzed rather than exploded. I would have liked to have seen more vulnerability and desperation in both women as they clung to each other. I think the emotional connection within themselves and with each other could have been explored on a deeper level so that both they and the audience were wrung dry by the end.

It is an interesting piece which is without a doubt engaging and nuanced but I felt there was room for more exploration of these complex, damaged characters which would have added a clearer and more detailed subtext and as a result allowed the audience to truly invest in them.