When We Built A Rocket Ship - The Coliseum Theatre, Oldham 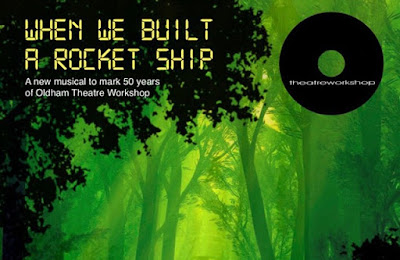 This year Oldham Theatre Workshop is fifty years old, it has helped develop and launch the careers of many professional performers including celebrated stars of stage, film and TV.  For hundreds of young people in the Oldham area, OTW as it is affectionately known has provided not only an excellent introduction to the arts but also lasting friendships and a second family.

To celebrate this auspicious event, OTW is performing a brand new musical,When WE Built A Rocket Ship, written by its Artistic Director, James Atherton and Sarah Nelson. Suggested by OTW members themselves this musical like many before it in the words of the creative team began, ‘as an idea and a group of people in a room. We played, explored and shaped ideas that then were developed into a script and lyrics.’

When We Built A Rocket Ship neatly spans 50 years beginning in 1968 when OTW was founded and concluding in the present day. The show begins with seven children discovering a magical wood complete with tree sprites and fairies with whom they create a fantastical hide away, this becomes their special place for their formative years and well into adult hood. Throughout this time building a Rocket Ship becomes a powerful metaphor for undertaking the seemingly impossible and triumphing against disaster and the odds.

During the course of this excellent production, the seven children are performed by four sets of actors who often look at their younger and older selves to learn inner-truths about themselves and each other. Central to the children’s adventures, beautifully captured in the song, ‘Ready for Adventure,’ is the collective power of their friendships and their imaginations. Looking at these children portrayed in the 70s and 80s, it is sad to think that today many young people of a similar age are denied these freedoms and pleasures due to fears over safety and the growing hold of technology.

Using four sets of actors allows the audience to see how the characters develop from children and adults and in particular how the growing pains of their teenage years mould and shape them in later life. This is a real delight to watch and made more so by some first-rate performances from the actors who play the children at different ages. Atherton and Nelson’s musical could easily become quaint and stray into sentimentality but they avoid this by introducing a range of issues that present the children and their adult selves with daunting challenges that ultimately can only be resolved when they embrace moments of pure joy and start living life to the full.

For the production, Meriel Pym has created a stunning woodland set. Comprising of walkways and a dazzling array of foliage, flowers and tree trunks. It is easy to see why the children become so enchanted with their magical den and are keen to return again and again. Jane Barreck’s deeply atmospheric lighting, creates exquisite patterns and casts long and haunting shadows over the children and everything that they do.

When We Built A Rocket is a wonderful show to celebrate Oldham Theatre Workshop’s 50th anniversary, it is colourful, witty, vibrant and full of vigour. The cast of forty plus hold their concentration throughout and are fully committed in everything that they do. A show of this quality especially in OTW’s anniversary year deserves to be seen by large audiences and if you live near Oldham I would strongly urge you to go and see it.