Love From A Stranger - The Lowry Theatre, Salford. 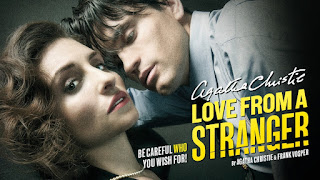 The play Love From A Stranger by arguably the UK’S greatest crime writer Agatha Christie,(co-written by Frank Vosper), is re-imagined in this brand new production directed by Lucy Bailey. The rarely seen thriller leaves spectators on the edge of their seat anticipating what could happen next. It is electric with immense suspense and contains many biting twists within its tale.

The story takes place in 1958 in a flat in Bayswater, London; and then in a cottage in West Sussex. A story of two people falling in love with severe consequences for all involved.

Set on a proscenium arch theatre worked perfectly allowing the spectators to forget their surroundings and be drawn in to what at times felt like a TV drama. The entire set of a house is static in Act 1, and a different house in Act 2, we see mainly the living area, with other rooms slightly shown through windows and doors. The spectators are intrigued. However, the stage moves consistently throughout the play allowing the spectators to witness scenes happening in other rooms which instantly brings us closer to the action. Mesh walls are used to separate some of the rooms creating new dimensions on the stage. We see a few scenes happening at the same time which allows the audience to know more about what's going on within the play than some of the characters. The props used within the set are minimal, it is not too distracting but does the job and effortlessly takes us back to the 1950s. We start to understand how the house works, and very much know our way around. There are rooms in the house that we do not want to go into so when we are took into those rooms it is an anxious experience from the audience. This is done beautifully on a movable track allowing smooth transitions between story and characters alike.

It is a very stylised piece of theatre, one that focuses more on the acting and story rather than lighting and sound. Therefore, when the spectators are surprised with moments of striking light and sound changes we appreciate them much more. They become much more meaningful. A blast of red light through some of the scenes is a powerful indication that something bad is going on, going to happen, or has already happened.

The acting style is realistic and is the perfect blend of comedy and drama. Although some scenes are comic there is always an undertone that something is not quite right. Nicola Sanderson who plays Louise Garrard is a wanted presence on stage. In many of the still scenes and moments of quiet, a simple walk, look, gesture from Sanderson brought the energy back in the room and allowed for some comic release. She suited the role perfectly and her entire characterisation made her a stand out within the show.

A stunning piece of theatre acted out effortlessly by the entire cast. This play leaves spectators with one inevitable message, be careful who you wish for.  Love From A Stranger is less of a whodunnit, and more of a whodunnwhat.