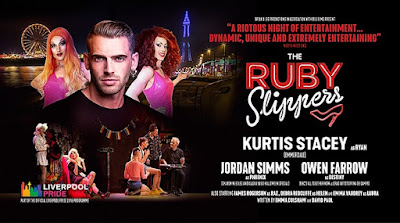 This show has something. It has, what is called in the business, legs. It also has actual legs, long and fabulous in the shape of two high-kicking, body-toned, diva drag queens, Owen Richard Farrow, (drag artist Divina de Campo in BBC’s All Together Now), playing Destiny and Jordan Simms as Phoenix. I could stop there, they can hold any stage on their own, both have supported Ru Paul’s Drag Race stars, but this show is so much more than that.

The Ruby Slippers first came to the attention of producer Bill Elms about two years ago when it was in workshop at the now defunct small Liverpool Lantern Theatre. It is an irony that is not lost on the show which stars a once successful drag club, The Ruby Slippers, that is also about to close. An offer of financial help comes from Laura, played by writer Emma Culshaw-Vaudrey an old school friend of the owner but is it too late? Elms joined the team at Break A Leg Productions and has worked with writers Emma Culshaw and David Paul to produce a thought provoking piece that raises more questions than it answers on the theme of true love from the perspective of a gay man whose object of desire feels he must follow his soul and transgender from male to female. The show also explores prejudice and bigotry inside and outside of the LGBT community as well as the value of friendship, family life and specifically a mother’s love and loss of her beloved son as he becomes a woman.

Recorded dance music plays before and during the performance which gives a lively buzz in a full house. The set designed by Gemma Hollywood works well in the space. It is open to the audience sitting in front at small round tables, club style with four rows of tiered seating behind in the one hundred and fifty seat studio. Sparkly red shoes made famous in The Wizard of Oz hang on the wall.  A well-stocked bar displays photographs of Judy Garland as Dorothy and Elizabeth Taylor. A sadly flickering neon sign gives up the ghost as the club gets deeper into debt when customers and drag acts leave to frequent and perform at the brand-new club in town named Nine Inches.  Stage left is a living area. Stage right is a small dressing-room area which spotlights Destiny and Phoenix as they prepare for their acts and put the world to rights in their own forthright way. We also see their vulnerability and humanity as the self-absorbed air-head Phoenix and worldly-wise Destiny, who by default are now the lead act, discuss their love lives and the fledgling but obvious relationship between club owner Raz, (James Rogerson), and bar-tender Ryan, (Kurtis Stacey).

Ryan, however, has a secret that he has been trying to explain to Raz but keeps being interrupted. The build up to his disclosure takes a full half hour or so to reveal to the audience, through the character of Ryan’s devoted, free spirited, tarot-reading mother Helen, separated from his homophobic father. Debra Redcliffe gives a sensitive, heart rending performance that explores the issue of transgender with conflicting emotions. Stacey has an obvious stage presence that is displayed with anguish, humour and ease. He is on stage for most of the short first half of forty-five minutes. When he takes advice from Destiny to tell Raz of his sex change plans by text message the audience gasps in the collective knowledge that this is a very bad move. Raz’s reaction was therefore somewhat underwhelming when having song and danced his way through and even kissed Ryan, his energy dips as he enters waving a mobile phone and says, ‘well that’s it then’.  Perhaps this is intentional, as I said, more questions than answers. Raz’s reaction as a confirmed gay man casts questions of true love versus sex and prejudice as he dismisses Ryan as a partner.

Ryan’s character is caring and likeable and I found myself missing him dreadfully in the second, hour long, half. When he finally reappears as Rachel pre-surgery but living as a woman it is a credit to the writers and direction by Craig Ryder that I found myself identifying wholeheartedly with both Helen and Raz. The show has some dark and dramatic moments and the ending felt a bit rushed, but it is overall a positive, uplifting, hilarious piece, liberally sprinkled with gay references, disco music and full costume drag numbers. Laura, friend and potential club saviour performs with Raz in an hilarious rendition of Dirty Dancing and there are many laugh-out-loud moments that sometimes took the cast by surprise. Thoroughly entertaining. There is exciting potential here and The Ruby Slippers deserves its spreading fame. 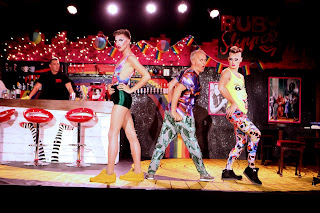