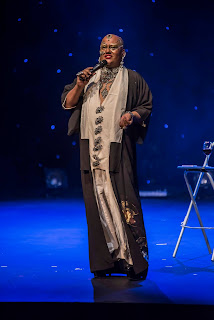 Mother’s Ruin is a touring queer cabaret which platforms new regional spaces and artists in its mission to increase LGBTQ participation and engagement in local performance art. Since its conception in 2009, founders Lisa Lee and Tim Redfern have successfully cultivated a thriving and cohesive network of creative support for LGBTQ artists, transforming clubs, pubs, established theatres, old mills and intimate studio spaces in and around Manchester and the North West. What makes Mother’s Ruin so remarkable is its simultaneous showcasing of established international artistes alongside regional emerging talent which it does in such a way that it is often difficult to tell them apart. The project is particularly worthy of commendation for the regenerative work it has done for marginalised queer communities and in areas of cultural isolation.

This particular showcase was performed in the Waterside Theatre, a thriving and vibrant arts venue in the heart of Sale in Trafford. The performance forms one part of the venue’s new and challenging REFRACT:18 programme.

The night was compered by the fabulous Jonathon Mayor; the hilarious yet viciously scathing glitter queen. The crowd were like putty in Jonathon’s hands the moment he walked onto the stage. He unreservedly engaged with the audience and had the whole room in stitches. Underneath the cruel and sassy charisma however Jonathon delivered a poignant socio-political commentary and, on more than one occasion, I found myself close to tears. He was the perfect compere for a night such as this, that seeks to position itself in that complicated and contradictory queer position of artful and artless, serious and flippant.

The first act was L Smith, a dance artist from the North East, who performed an interactive solo piece that delved into society’s relationship with alcohol. It was a mesmerising piece of work. The horror-film-like mask and the chilling soundtrack accompanied by L Smith’s tortured and twisted movements left me with goose-bumps.

Also on the billing were Nathaniel Hall, Debs Gatenby, and Thick Richard, who delivered a combination of charming, offensive and moving spoken word.

A surprise late addition to the line-up was the Manchester drag artist and pop star Monopoly Phonic. I first saw Phonic at the infamous Cha Cha Boudoir, where she performed an incredible lip sync revolving around Coronation’s Street’s legendary Gail Platt. Since then Phonic has gone from strength to strength releasing as series of EPs and working with fellow Manchester queens Lill and Violet Blonde. Phonic performed a succession of her songs including ‘Click’ and ‘Tall’ from ‘ Next Time You’re At The Checkout And You Hear The Beep.’

Closing this eclectic evening was the legendary and incomparable Cheddar Gorgeous, and he is drag royalty, widely recognised not only in Manchester, but also on an international scale. Gorgeous is known for not only his stunningly executed makeup and costume but for his highly politicised style of drag. He recently led the drag march in London in protest to the visit of American president, Donald Trump. This evening is of course no exception and Cheddar Gorgeous strode onto stage wrapped in a European Union flag and lip-synced a heart-breaking love ballad about falling out of love with the UK. He closed the show in style, in a frenzy of emotion, by stripping naked but for a signature glittery codpiece to reveal “F*** Brexit” written across the chest. It is a well-deserved standing ovation that followed, and certainly not only for Cheddar Gorgeous but for the whole host of queer performers who have taken to the stage and for the powerful message and sentiment of the project as a whole which we as an audience couldn’t help but feel included in.