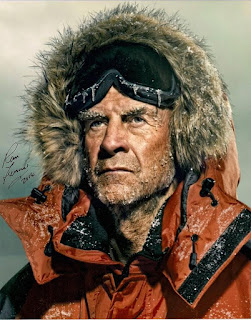 Many people may claim to live a dangerous life but when you compare this to a certain Sir Ranulph Twistleton-Wykeham Fiennes then all bets are off.  Described by The Guinness Book Of World Records as “the world’s greatest living explorer” he has spent much of his adult life tackling some of the most dangerous and unexplored parts of our globe.  It was no surprise that his appearance at The Lyric Theatre at The Lowry in Salford was all but sold out.
In the style that has become very familiar with stand-up comedians, Sir Ranulph introduced himself from the sidelines.  There was a short video describing just some of his amazing achievements and he then arrived on stage to very warm applause.
The style of presentation was something of a surprise as Fiennes stood behind a lectern in a very formal pose, aided by a large screen on stage that initially was just a black.
Fiennes immediately went into the story of his life, starting at the very beginning where he told us he had been moved by his mother to South Africa as a very young child and only returned aged 12 years.  It was here that he moved into the area of self-deprecation which became a familiar theme throughout the evening.  Fiennes is an excellent storyteller and has a very calm and relaxed manner, which made the choice of formal lecture style presentation even more surprising.
The first half of the show was very much about his life prior to being the polar explorer as we all know him today, his struggles through his academic life that includesdspells at Sandroyd and Eton College and his career in the armed forces as an Officer which resulted in an 8 year stay in the SAS – apparently much to his own surprise.
The second half of the show was much more visual as he talked more about his polar expeditions and we were treated to some amazing photographs on the big screen – some of which involved graphic detail of frostbitten hands and feet, either his own or one of his team.
One of the expeditions he focused on was the unsupported trip across the Antarctic continent on foot with Doctor Mike Stroud – a world famous expert on starvation – which was hastily arranged when they found out the often referenced ‘Norwegians’ were planning exactly the same trip.
The real strength of this show is obviously Sir Ranulph Fiennes himself and in particular his ability to make his clearly very dangerous expeditions sound light-hearted and humorous but without losing any of the realism that he and his team were only a step away from death the whole time. One reference in particular about human starvation expert Doctor Stroud discovering that “the level of starvation they were suffering was severe and beyond even his expectations” had the audience in fits of laughter.
The final part of the show was a Q&A that involved a mix of questions from the audience and questions that had been submitted earlier in the evening via the Twitter feed published on the big screen.  This allowed Fiennes to provide some more personal insights into his life and in particular the love even today for his wife Ginny who was with him for many of his early expeditions but sadly passed away in 2004.
The show itself was extremely enjoyable and Fiennes happily chatted to audience members and signed copies of his latest book in the foyer afterwards, which just made the whole experience more personal.  The only thing I could possibly criticise was the poor use of technology, where the simple inclusion of animation and graphics could have made his job of presenting his life so much easier – but this would be harsh on what was a superb overall experience.
Reviewer – John Fish
on - 15/7/18