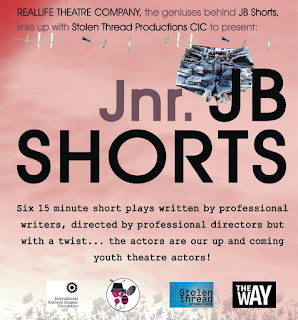 The Manchester 'institution' that is JB Shorts, now in its umpteenth year, and proving a very popular and effective showcase of new writing and local talent, has now extended operations and has produced the first of hopefully many Junior versions.

Using three Greater Manchester youth theatre companies - A Will And A Way Acting School, Little Big Theatre Workshop, and The Way Theatre Rep Company, the format remains the same { 6 x 15 minute plays by established writers and directed by local professionals within the industry } but instead of adults taking to the stage, those performing these plays are now teenagers. It doesn't say, but from watching them onstage this evening I hazard a guess that the youngest would be 13 and the eldest 23.

Most of these scripts I have seen before in previous JB Short (or similar) evenings, although I think I would be right in saying that a little - but not much- of the adult content had been omitted in some. What was actually perhaps more interesting for me was to see these plays with new eyes. youths have an energy and a presence on stage which adults don't possess. Their demeanour is different, their understanding of the script, stagecraft, and characters are all different from the adults' and so things which I completely missed in the adult version I see with complete clarity here, and also vice versa. This can also, in part, be down to a different director and different dynamic, but it is fascinating nonetheless.

I love working with young people. There is something so fresh and exciting about their process and commitment. And this was evidenced in oodles this evening. Despite some of the characters they were acting being much older in both age and experience than these youths were, they brought a vitality and determination to the roles which, despite the years of experience an actor of the correct age may have, is unable to bring to the characterisation.

Needless to say really, but I thoroughly enjoyed the evening, and all six plays were superb. Rather than writing a breakdown of each play - which serves only to prove that I understood the story-line of each! - please allow me to give a few 'special mentions' to my personal favourites of the evening which saw 6 different writer, 6 different directors and 21 talented young people bring their visions, skill, creativity and talent to the fore.

My two favourite plays were both in the second half; Pop! by Lindsay Williams, which saw a group of friends wake up in their tent after a drunken night of festival-going, and their hilarious attempts at trying to fold the tent back into its bag. Their bickering and backchat pitched perfectly and cleverly touching on current contentious issues with humour. And the evening ended with my absolute favourite. A two-hander called Blind Date by Dave Simpson and deftly directed by Kimberly Hart-Simpson. This was a highly clever take on both online dating and self-image which, with humour, highlighted the 'dangers' inherent in both. Cleverly written and superbly acted by Evie Healiss as Angela and Ben Whittle as Andrew.

This was a fantastic and highly successful event, and indeed the standard was remarkably high. I simply couldn't credit all, but you have made the bar-level extremely high for any successive Jnr JB Shorts events, and I congratulate you all warm-heartedly and sincerely.