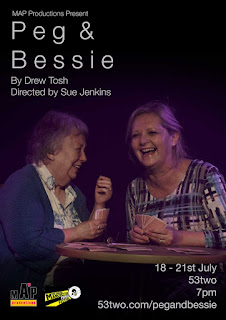 Walking into the main auditorium of  53Two was like walking into my grandma's living room. The set was superb with great attention to detail. The furniture and furnishings matching exactly one's stereotypical but often accurate ideas of what a home looks like when the occupant is an elderly widow.

Drew Tosh's script starts with the two sisters, Peg and Bessie engaged in a card game, and we soon pick up on the fact that the older sister, Peg, whose house this is, is a little more carefree and extrovert than the more straight-laced and prim younger sister Bessie. Peg is very careful with money, a little miserly perhaps, and refuses to buy flowers or to even visit the grave of her husband, saying that she saw enough of him when he was alive!

There is good humour, and plenty of it as the relationship between the two becomes clearer. It is a gentle, and sometimes touching portrayal of ageing siblings.

Directed by Sue Jenkins, there is good use of space and the dynamics of the two sisters are very realistically brought out. Their diction was also faultless.

Where this play falls down somewhat is in the flashbacks scenes. These are much weaker than the main body of the narrative and what is said could have been told a slightly different way 'in the present'. One of the siblings plays herself in the flashback as the other plays doctor, Mystic or whatever necessary. And whilst the hospital bedside scene was undoubtedly touching, the sisters as toddlers was painful and excruciating!

The play plods on at a similar pace throughout; gentle comedy underpinning the lack of zest these two women have, and despite outward appearances to the opposite both deeply miss their husbands and both have a great fondness for each other.

It was the play's ending which was the most unfocused and unclear.  The play, for me, ended with Peg's line, 'You'll miss me when I'm gone.'. However, if that was the 'first' ending of the play, then there were actually 5 endings in total, and with each the play became less and less firm and powerful.
It was certainly very unclear when, if and how either of them died, and why one came back as an angel, and the other came to take her bow also as an angel. .We have suddenly jumped from the solid terra firma of reality and  a play about old age, to a fantasy land where angels communicate with the living and send them off on their journey to Paradise!

Jenny Gregson played Peg with a twinkle in the eye and a lust for life that only the older generations have, and can get away with. A mischievous but centred portrayal. Kerry Willison-Parry was a more conventional and sensible younger sibling Bessie, and for me, had the edge on stage, the character just that little more complete.

The script offers no surprises, (except a bizarre ending!), but does offer the opportunity for two older females to showcase their skills in a gentle sympathetic study of those years between the loss of your partner and the hereafter.