Who Runs The World? (Girls): A 'Scripts Aloud' Night - The King's Arms, Salford 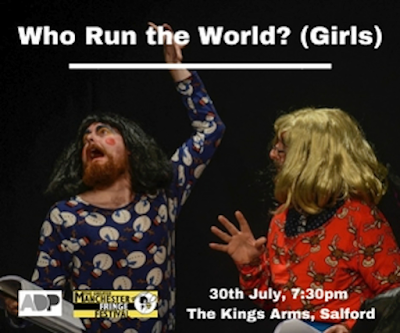 On arriving at The King's Arms to cover this show, I realised two things, both of which came as a surprise. First, the title of the show had been abandoned, and in its place the company had decided on their usual and regular title of  'Scripts Aloud' [Manchester ADP having a regular monthly slot at this venue for short script-in-hand performances of new writing]; and second, it was not, as their poster suggested, an hilarious evening of drag, but instead an evening devoted to the talent and creativity of women, using only women writers, directors and actresses in this evening's show.

I am therefore also very uncertain as to why this standard ADP format was part of the G M Fringe Festival. But part of it it was, and so I went ahead to review.

As already hinted at, the Manchester ADP are a company which specialise in championing new writing. Every last Monday of each month, they meet at The King's Arms and perform new scripts, most of which are very much in the developmental stages and may not even yet be a completed script. The writers are present, and it is an evening all about them. At the end of the evening the audience are invited to write suggestions anonymously if they wish in the form of feedback, or if they are more bold, then a Q + A session with writers, directors and cast on stage unfolds, and this is a great opportunity for the writer to see how their script is perceived by others and what areas they might be able to either improve or develop. This evening was exactly that, but with one major difference... it was, as in fact their original title actually suggests, an evening of women only.

Three 15 - 20 minute scripts were presented and the performers were still using the script. Of course this is what it is all about, since the reality is the director typically gets only 3 hours rehearsal with the cast before the performance. They are very rough and ready, but it is the words we are focusing on, not the quality of directing or acting. They are simply there to aid our understanding of the spoken word.

This evening's scripts were 'Tea And Oranges' by Patricia Cunningham, which was about a group of friends gathering to pay their respects to Leonard Cohen. Following this was 'Mr. Men' by Anna Girolani; which was a contemporary and off-side look at the classic 'I Know My Place' sketch of The Frost Report (1966) which saw John Cleese, Ronnie Barker and Ronnie Corbett perform one of the finest sketches of all time. Girolani herself admitted that these roles could be played by either male or female, but of course this evening it was all female, and worked excellently. The third and final piece was 'Pink' by Micha Colombo, which pitched a verbal battle between old-style feminism and modern liberalist feminism.

A large and appreciative audience crammed in a very hot and sticky space, but it was, as usual, a highly enjoyable and hugely profitable event, and long may they continue.