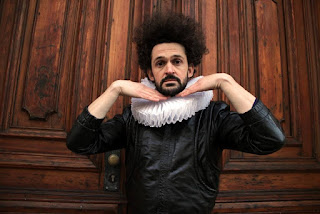 Sick of Shakespeare? Baffled by Butoh? Cringing at Chekhov? Have no fear, Garry Starr is here and he’s on a mission to save theatre! In Garry Starr Performs Everything, Starr (the alter ego of Australian actor Damian Warren-Smith) races through various forms of theatre in about an hour, to revive the dying art of theatre by getting audiences' members interested in it, so they go and watch it and save theatre as an artform. Part one-man comedy show, part love letter to live theatrical performance, Garry Starr Performs Everything is a rip-roaring hour of entertainment.

Emerging to an overly portentous voice-over and dramatic music, Starr entered the stage performing a mime to a pounding techno beat, dressed in a mish-mash of a costume: Elizabethan ruff, leather jacket, and ballet tights. Starr’s physical skills were hugely impressive, his miming was graceful and his physicality was hugely expressive. After introducing himself, Starr went on to tackle Shakespeare. “Shakespeare…it’s slow, isn’t it?” he asked the audience. “But it wasn’t in Shakespeare’s day. Hamlet wasn’t five hours long. The average life expectancy back then was ten!” Starr then proceeded to demonstrate how Act 2 Scene 2 of Hamlet would have been performed in the 16th century: the dialogue raced through at double speed! From here, he tackled Burlesque – complete with nipple tassels! Again, this gave Starr the chance to demonstrate his superb physical control and skills; while the show took a very tongue-in-cheek approach to the theatrical forms it was engaging with, there was still an element of respect embedded within Starr’s performance.

Next to be performed by Starr was the Melodrama and he plucked an unwitting assistant from the audience to perform an extract from Harold Pinter’s The Lover (albeit with a different scene ending grafted on to make it more Melodramatic!). Cue much discussion of not saying stage directions and the difference in pauses (“That’s an Ibsen pause, not a Pinter pause!” Starr exclaimed at his coerced co-star), although the audience member certainly quipped back as good as she got. After this the audience was ‘treated’ to Starr’s ballet performance, dressed only in ballet shoes and a G-string! The front row audience got a closer view of Starr than maybe they would have liked!

For the acting geeks in the audience there was a silly but funny joke involving Uta Hagen before Garry presented an excursion into farce, in a slinky black dress. Next up was perhaps the most interesting presentation: Butoh theatre. After asking nearly every audience member if they “know Noh” or if they “know Butoh”, Starr stumbled across someone who did know both Japanese theatrical forms and had seen them both. Starr handed the audience member a drum and they began to beat out a varying rhythm on it. Starr’s movements responded in time to the speed of the rhythm as he played out a comic scene of someone taking a drink from a fridge, consuming it and being poisoned. Again, a superb demonstration of his physical theatre and clowning skills. From here, Starr attempted to revive the art of slapstick which involved him hitting audience members onstage with a foam stick in time to the percussion in the chorus of the Simon and Garfunkel song ‘The Boxer.’ Starr then followed this with an excursion into a specific type of “Euro” Theatre which, he said, was all about stripping theatre back to its roots (like what Artaud attempted with his Theatre of Cruelty): Chekhov was (accurately) performed as manic laughing and crying, Ibsen’s Hedda Gabler became a brief sigh, and his take on Franz Kafka’s Metamorphosis was an insect-like dance!

Starr’s exploration of tragedy, however, was perhaps the highlight of the night. A re-enactment of the end of Romeo and Juliet but with a twist: “It’s easy to make Shakespeare sound contemporary,” Starr said, “any Tom, Dick, or Cumberbatch can do that. The trick is to take something contemporary and make it sound Shakespearian!” He then proceeded to wring every ounce of tragic delivery to the lyrics of the Britney Spears songs ‘Hit Me Baby One More Time’ and ‘Toxic’ as his Romeo discovered Juliet and then poisoned himself with a kiss. A very clever and very funny performance which summed up the show: funny but respectful to the art of theatre.

Starr’s venturing into mask-work saw the humour become decidedly more adult, with him showing literally “everything” while in a trance-like state wearing a commedia dell’arte style mask, removing the mask and running off-stage in embarrassment to have a conversation with his mask self before emerging, triumphantly, as a clown to perform a fantastic ‘cirque-noveau’ routine and ending the show with a Musical Theatre tribute by performing ‘Defying Gravity’ from the musical Wicked.

Being an hour long, the show does not outstay its welcome and provides much hilarity throughout. Starr (or should that be Warren-Smith?) is a thoroughly engaging performer with superb timing and physical skills. Credit should also be given to his technical assistant who kept the lights and sounds going flawlessly. If you get the chance to see Garry Starr Performs Everything, take it. It really will make you fall in love with theatre as an artform again.