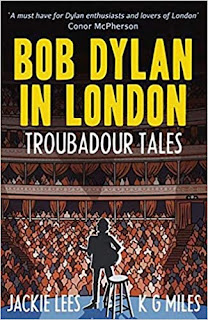 TITLE: Bob Dylan In London: Troubadour Tales
AUTHOR: Jackie Lees and K.G. Miles
PUBLISHED BY: McNidder & Grace.
Bob Dylan first visited London as long ago as December 1962 - to film a television play in which he gave the first broadcast performance of 'Blowin’ In The Wind'. Like so much from that era of television, the play is long gone, junked by BBC apparatchiks who valued reusable film stock over cultural milestones. But memories remain, usually blurry, often contradictory. There is still some debate over which venue hosted Dylan’s first appearance on British soil - several folk clubs based in several pubs vie for that distinction - but what is not in doubt is the importance London has had for Dylan over the decades, from that first low key appearance at the start of the sixties to headlining an open-air festival in 2019.

The present work seeks to explore the relationship between singer and city by devoting a chapter apiece to each of Dylan’s acknowledged visits between 1962 and 1978, though later visits in 1981 and the early nineties are touched on. Perhaps the first striking thing that emerges from this history is a socio-economic factor: unlike so many first-time visitors to Britain destined for later superstardom, Dylan never had to couch-surf (as they didn’t call it in those days). On his first visits, he was accommodated at the grand Mayfair Hotel in Knightsbridge (the BBC picked up the cheque, as well as paying for his flights: an astonishing privilege for a 21-year old performer virtually unknown in Britain at the time), a venue he spurned because of its stuffy formality, in favour of bedding down at the director’s house in Hampstead. Thereafter, his normal centre of operations during London visits was a suite at the Savoy. He never had to rough it!

It’s a pity these early visits are so poorly-documented because in many ways they are the most interesting of all and the authors can only speculate about some of the incidents reputed to have taken place: for instance, did Dylan really have a three hour chat with the poet Robert Graves or was the limit of their acquaintance attendance at the same house party in Tregunter Road? Dylan’s own Chronicles suggest the former, but he is a notoriously unreliable narrator of his own life. By the time of his next visit in 1964, with fame burgeoning, things become a lot clearer and from 1965 onwards, we have detailed, if sometimes contradictory, accounts of each visit. The best documented remain the 1965 and 1966 tours, both filmed by D.A. Pennebaker and with many famous incidents veraciously captured on camera. Even so, the authors are able to fill us in on some things that Pennebaker either didn’t see or Dylan chose not to have recorded: his split with Joan Baez during the spring 1965 tour and a promising liaison with the eighteen year old Marianne Faithfull that Dylan aborted upon discovering she was pregnant (by someone else, of course).

The 1966 ‘electric’ tour (or the ‘Judas!’tour, depending on your politics) has gone down in history as one of rock’s lightning points, with Dylan fronting a rock band against the protests of the various folkies and alleged ‘communists’ who had booked their tickets without knowing his style had changed (easily done in pre-youtube/internet days). The true story is somewhat more complex than that, but the legend is more appealing than the facts. To explore the whys and wherefores of Dylan’s ‘going electric’ is not part of this book’s remit, but it’s interesting to note that after one draining gig at the Albert Hall where he’d faced down a barracking audience, Dylan retreated to his room at the Savoy only to be told the Beatles had called round to offer him moral support. Being ‘too tired’ to see them, he sent them away ....

It was twelve years before Dylan performed in London again and his residency at Earl’s Court during the summer of 1978 and the concert at Blackbushe Aerodrome that followed to accommodate those who couldn’t obtain tickets for Earl’s Court, have also passed into legend. The shame is that security at those venues was so tight that bootleggers were discouraged from even trying and the only records of those gigs are incomplete and poorly-recorded.

The authors round off with a chapter on Dylan’s special relationship with the Crouch End area of the capital, a place he seems to have a fondness for and where he chose to shoot a video in 1993. Along the way, we learn of some amusing incidents, such as Dylan’s non-incognito visit to London Zoo in 1981 (apparently, no-one recognised him), the famous ‘plumber’ incident of 1985 (Bob mistakes Eurythmic Dave Stewart’s house for that of another plumber, coincidentally also named Dave) and the galvanising effect Dylan’s casual decision to sit in front of one particular wall painting for an album cover had on the career of the artist.

This highly enjoyable book will amuse and divert the more-than-casual Dylan fan (diehard Dylan fans will probably know most, if not all, of it already) and send you back to the related albums with a renewed curiosity.
Reviewer - Richaed Ely
on - 15/1/21
at January 17, 2021 No comments: