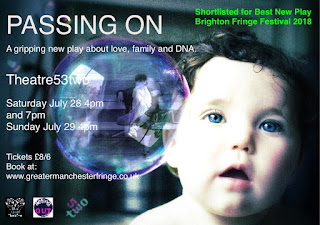 Set in contemporary Ireland, this is a very touching and moving story of a gay couple, recently married and we see them decide on becoming parents. A friend of theirs agrees to be the surrogate and the couple bicker over who is going to be the sperm donor. It is eventually agreed that both will donate and the friend will chose one anonymously.

Whilst all of this is happening we also learn that one of the men is an orphan, and he is searching for his biological parents. His search reveals that both are dead, but his mother was living in a lesbian relationship until her death, and he makes contact with his mother's partner. He also learns that his mother had a rare genetic condition known as Huntington's Disease which affects the brain cells and eventually shuts the whole body down. There is a 50 / 50 chance of this disorder being passed on into the next generation and we learn that after taking the tests, he does indeed have it.

Not only is this news utterly devastating for him and his husband; but there is now also the added complication over whose sperm was used and whether or not the baby will have this condition too.

Without giving away too much of the plot I'll stop there, but this is not a happy play at all. It's a tragedy worthy of the greatest of the ancient Greeks and provokes not only our thoughts but our heartstrings too.

The play, by Sean Denyer, does over-load the listener at times, and certain scenes and speeches are definitely over-playing the emotions such as the final scene where Brian reads Tom's letter. These moments are totally unnecessary and it did feel like the bread was being buttered on both sides at times.

The play despite this does pack a powerful punch, but the awkward scene changes conducted to loud music diffused the tension each time and served only to irritate.

Produced by Blue Heart Theatre and Acting Out, this play has the potential to reach a mainstream audience and with some more R+D and streamlining, I feel sure that that is what it will do.

In this afternoon's performance at Manchester's 53Two, Brian Gaughran and Steve Kenneally played the gay couple of Brian and Tom with ease, empathy, and realism; whilst the strong supporting roles were played by Rachel Fayne and Shane Kavanagh. The whole was directed by Howard Lodge. The characterisations and relationships between them on stage were nicely handled; but the actual stage management of the actors was somewhat clumsy.

A play with huge potential with an important message to tell.