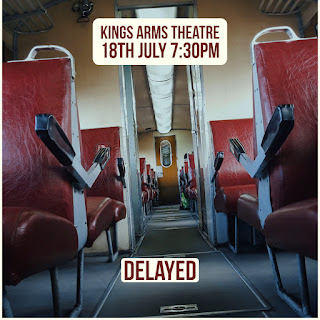 We are on board a train travelling to Manchester airport. Six passengers find themselves sitting next to each other, and as the train comes to an unscheduled halt which sees the train delayed by over an hour, we learn something about these six travellers.

The first thing I question is whether or not such a set-up is 'legitimate'. The premise admittedly was a good one, and to have a few different strangers meeting and communicate on a train is most certainly not a new idea, but could have been if treated somewhat differently. There was absolutely no sense of urgency in any of the passengers, nor did we ever feel that there were any other passengers on this train of several carriages. Nor could I understand for the life of me how it was possible to rearrange and move fixed train seats to make a long line of six chairs all facing the audience!

Unfortunately there was no programme nor publicity material of any kind and so have no idea on the names of cast and crew.

The script was stilted and unimaginative, and the acting little better. I was uncertain whether this was a comedy or a socio-political statement; a drama or just a general comment on the state of our rail network. It started very slowly and the pace only picked up marginally with the entrance of the businessman determined to catch his flight to the USA. The individual stories of the travellers were clear and with thought and rehearsal could have been brought to life and provided a watchable and interesting narrative from which to develop. Sadly though, this was not the case, and I was unable to sympathise with any of the actors on  stage, since I simply did not believe any of them.

Two young lads going away on holiday to Spain for the first time: an invitation for raucous, over-the-top comedic stereotypical laddish boozy behaviour missed.  A nerd, afraid of flying, yet setting off to Australia: why? we never knew. What was his family background? we never knew. A hugely comedic or deeply dark and furtive character opportunity completely missed. A young couple who have been trying for a baby for ages, and then want to adopt, despite the differences and changes of opinions between them - another great opportunity to bring out these themes and play with them completely lost. The only one to actually have any relevance and balance to his character was the businessman, but even then, we learned too little, too late, to be able to sympathise with his plight.

It was also a very strange ending to the piece - the rejoicing that the train is finally starting to move again and no-one will actually miss their flights juxtaposed with the businessman's bad news was a very odd place to finish... mixed emotions, and no resolution; yet the dialogue prior to this had been mostly upbeat.

Verdict: a very poor script, lacking proper rehearsal and focus. I can only hope that this piece, in the spirit of the G M Fringe Festival, is a first draft and trial run. The play needs much R+D before its next outing.