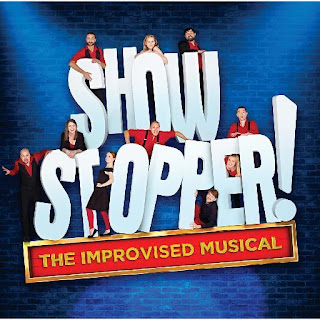 As a huge fan of the television series ‘Whose Line Is It Anyway?’ the improvisational comedy show hosted by Clive Anderson in the late 80’s that ran for a decade I was intrigued to watch Showstopper The Improvised Musical which seemed to offer a similar theme to my favourite show from my teenage years. The similarity being that there is no script and everything that unfolds is dictated by suggestions from the audience/panel such as the characters and the style of the show.

Showstopper! began its theatrical life in 2008 as a workshop at the Actors’ Centre in London when Dylan Emery, Adam Meggido and Ken Campbell who took a group of actors with little or no improvisational experience and within a week attempted to get them to perform an hour-long extemporised musical in front of a packed house. Following its huge success the production team has continued to pack auditoriums around the UK to watch their crew of extremely talented actors and actresses create new and unique masterpieces with each and every performance.

Each show begins with the compere-cum- narrator (Sean McCann) answering a red telephone with "oh hi Cameron" -  the concept being that the ‘West End Producer’ on the end of the line needs a brand new musical by 9.45pm that evening as one of his theatres has gone dark and requires a brand new musical in the space of just over 2 hours with the creative writers' (audience) expert help. We, the creative team, are asked for a location in which this new musical is to be set, tonight Sale Waterside’s audience  chose Ikea followed by a selection of musicals to serve as inspiration for the numbers in this new exciting Swedish themed musical titled ‘Screw Loose’ where  Miss Saigon, Rent, Grease, 42nd Street and Hamilton were initially picked.

The talented cast of Pippa Evans, Philip Pellew, Andrew Pugsley, Lucy Trodd and Jonathan Ainscough under the musical direction of Duncan Walsh Atkins on keyboard and the female percussionist the crew wasted no time at all to start the show with ‘One Last Time’ in the style of Miss Saigon and Rent.

The story cleverly revolved around the new Swedish store Ikea that was about to have its grand opening with Hans (also known as Mr Hans) at the helm with his loyal colleague Olga by his side. With ‘Billy Bookcase’ and his range of various items named ‘Vanessa’ aiming to be his best-sellers he set out on a quest for success with his maze of endless plastic and white wooden furniture.

The audience clearly found the impromptu dialogue and lyrics hysterical as the talented team easily steered the story along with their comedy and fantastic vocals, creating catchy tunes such as ‘You Bet Your Ass God You’re Gonna Be Mine’, 'Tuck Tuck Hey Through The Maze’, ‘Grand Opening’ and the hilarious ‘Flat Pack Attack’ whilst evolving the intertwined love bonds between the characters Olga and Sven, Vanessa, Billy and Hans.

At the end of the first act the audience were encouraged to tweet ideas of how to open the second, and how the story should progress in which the Sale audience obliged nicely. In the second half the fantastic five brought the story and plot to its conclusion worthy of any West End Musical leaving the audience as always amazed by the talent and ability of these individuals to not only deliver the lines but to actually make them up as they go along bouncing off each other to develop this story of love, rejection and tennis.

The highlight for me was the ladies' renditions of ‘Sauna Of Love’ and ‘If The Hat Fits’ had me chuckling for the rest of the evening. What a fantastic and unique experience of magical musical theatre this masterpiece was, Showstoppers excels my teenage love of the comedy TV series as this takes improvisation to a whole new level of talent.

Showstopper! continues its tour of the UK until December 2018 and I would implore anyone to go and witness first hand this amazing and superb delivery of impromptu musical theatre.