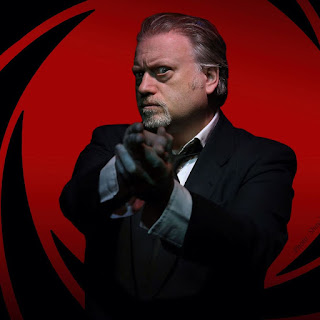 Subtitled, 'Every Bond Film in 60 Minutes', this one-man show produces just that - almost!

Brian Gorman, the man whose word is his Bond, sets out not to recreate the entire plot-lines of all the films [I think I counted 23 this evening... ] but instead creates a kind of miniature 'feel'  or 'montage' for each.

Perhaps I better explain. Walking onto the stage to the famous theme tune, Gorman takes each Bind film chronologically (I assume) from Dr. No to Spectre. Each film is given a few minutes' in the spotlight in which Gorman sings a little of the thee tune (just in case you didn't know which film it was - like me) and then gives a few lighting-speed impressions of the main characters and memorable dialogue that gave each film its plot. [including M, Q, Moneypenny, Pussy Galore and all the other so-called Bond-Girls, the evil villains etc etc]. Each of these sequences usually ending in a huge 'BOOM!' killing all in sight except of course Bond! The physicality of the sequences - comedy gun fights and throat-slittings were clever and very funny, I just wish I had been able to recognise more of the impersonations. (my lack of knowledge not Gorman's ability)

For those of you, like me, who remember watching the films as they were released on TV over the successive Christmases of my youth, and then never watching them again since; I found it all quite difficult to follow, and i certainly didn't know who majority of the impersonations were. However, if you know your Bonds, then I feel sure you will easily 'get' it all and find it slick, funny and clever.

I understood Connery, didn't particularly feel Moore was quite right, and Brosnan was hilarious, being given an almost feminine high-pitched RP accent.

Gorman has obviously given a lot of time and energy, let alone perhaps sanity, into this project, and it was excellently done. I missed the original Casino Royale where various actors including Ronnie Corbett and Peter Sellers all get to play Bond - that would have been a fun film to condense into a couple of minutes; but Gorman's take on Quantum Of Solace - nothing more than a questioning shrug was hysterical!

A very personable performer who doesn't take himself or his show too seriously, but has developed a clever and slick show nonetheless. A Bond aficionados heaven!