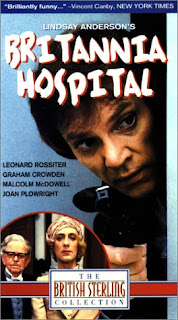 Lindsay Anderson’s 1982 black comedy, Britannia Hospital, completed a trilogy of films featuring the character of Mick Travis (played by Malcolm McDowell and first seen in the 1968 film, if… and then again in O Lucky Man! in 1973). After satirising public school life in the first film and capitalist society in the second film, Anderson and screenwriter David Sherwin turned their attention to the NHS and class war for their third collaboration.

Sadly, Britannia Hospital is undoubtedly the weakest of the three films. While there are some interesting ideas, some clever comedic lines, and strong performances from Leonard Rossiter (fully channelling his more famous alter-ego Reggie Perrin) as the hospital administrator Mr Potter, Graham Crowden as the ego-driven genius Professor Millar (reprising his role from O Lucky Man!) and, in a final, glorious scene filmed shortly before his passing, Arthur Lowe (of Dad’s Army fame) who plays a hospital patient who gets so worked up delivering a patriotic speech that he dies, the film lacks the formal daring of if… and the sharp, satirical allegory of its follow-up.

The plot of the film centres on Britannia Hospital’s preparations for a royal visit to mark its 500th birthday. The visit comes under threat due to a combination of striking workers, angered that Britannia Hospital has a ‘private wing’ where those with wealth can recuperate in isolation and eat kippers and devilled kidneys for breakfast, and protestors who are demonstrating against a corrupt president of an unnamed African nation, President Ngami, who is resident in the private wing. The film’s sub-plot features Mick Travis (very much a supporting player in this film after being centre-stage for the previous two; McDowell delivers a decent performance with what material he has), now a ‘citizen of the world,’ who has replaced the gun with a video camera as his revolutionary weapon of choice, exploring the hi-tech Millar Centre which is on the hospital grounds. Professor Millar, whom the centre is named for, is obsessed with harvesting organs and speaks of his intent to reveal his latest project, ‘Genesis’, to the world during the royal visit and Mick finds himself as an unwitting helper in Millar’s work.

Britannia Hospital straddles several tones and genres during its near two-hour run-time: it juggles a ‘state of the nation’ commentary, where there is civil unrest and bomb attacks, the comedic elements surrounding the royal visit (Lady Felicity Ramsden is played by a male actor who often talks with such an upper-class accent as to be incomprehensible) and striking workers (with union leader Ben Keating being easily swayed to restore order to the hospital kitchens with the promise of a MBE), an attempt at commentary on the media through the work of Travis and his accomplices Sammy and Red and the BBC film crew who follow Professor Millar around for most of the film, and an excursion into science-fiction and body horror with the Millar/Genesis subplot. Whereas such tonal shifts had been present in Anderson’s earlier films in the trilogy, here it felt as though perhaps he and Sherwin were trying too hard, biting off more than they could chew. The scenes with Millar which, one assumes, parodied the films of David Cronenberg, pushed grotesque imagery to grand-guignol proportions: in one scene, a brain is bisected and half liquified in a food processor to make a ‘nutritious’ drink, and near the end Mick Travis becomes the crowning touch to a Frankenstein’s monster which Millar has created and goes berserk, his rampaging body being ripped apart and spraying all the surgical staff in blood. The violence and gore of these scenes certainly fit uneasily alongside the comedic elements elsewhere in the film.

The strongest moments of the film, however, come near its climax. When the anti-capitalist, anti-imperialist protestors learn that the Queen Mother has been smuggled into the hospital, they break through the hospital’s gates and are met with a line of riot police. In scenes which recalled the anarchic revolution at the climax of if…, a worker offers a police officer a flower who responds by punching the worker in the face and triggering a full-scale riot. As workers and protestors are beaten by police (in scenes which eerily foreshadowed clashes between striking miners and police during the 1984-85 strikes), a band plays the national anthem while the royal guests and hospital administrative staff arrive at the Millar centre. The film’s final scene, with a chilling speech by Millar (expertly delivered by Crowden) and sounds even more prophetic now than it did in 1982, where he unveils Genesis (a giant brain supported by robotic machine), which proceeds to recite the “What piece of work is a man…” speech from Shakespeare’s Hamlet, is a stark moment and a sobering ending. A brave ending, no less, not just to this film but the trilogy of films. Britannia Hospital may be the weakest of the ‘Mick Travis’ trilogy but that final scene is astonishing and more relevant now than ever.