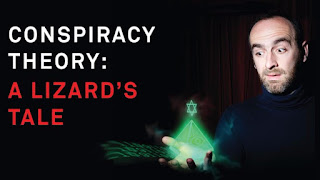 Marlon Solomon’s one man show Conspiracy Theory: A Lizard’s Tale is a compelling, and often darkly humorous, look into the world of conspiracy theories. Solomon makes no secret of the fact that this show is a deeply personal one for him. A non-practicing Jew from the age of eight – after he took the Lord’s name in vain in the primary school playground and suffered no ill effects convinced him that what he was being taught about his religion didn’t count for anything – Solomon has become drawn into the world of conspiracy theories and, by following the connections, realised that many of them are linked to the ‘world’s oldest hatred’, Judaism.

The show begins with Solomon seated with his back to the audience, watching a projection from his laptop of clips of conspiracy theory videos. Once he is up and addressing the audience, Solomon comes across with warmth and humour and aided by video clips and slides, like a politicised Dave Gorman. After introducing himself, Solomon proceeded to explain how articles shared by friends on Facebook in the aftermath of the attacks in Nice back in 2016 presented the attack as part of a conspiracy which, ultimately, led back to the idea that Jewish people were behind the attack as a way of destabilising the societies across the globe in order to dominate the world. While this is clearly a ridiculous notion, it is one which lies at the heart of numerous conspiracy theories and stems from one of the most notoriously anti-Semitic books published (and second biggest-selling book in the world after the Bible) called The Protocols of the Meetings of the Learned Elders of Zion (originally published in 1919). The book claimed to detail how Jewish leaders had met in Switzerland to formulate their plan for world domination. It was translated into several languages and remains one of the most widely distributed anti-Semitic texts ever. It also happens to be an example of what we would now term ‘fake news’ (a concept with a modern name but which has been around for centuries) having been exposed as a complete fabrication. The falsity of the work, however, did not prevent people from believing it to be true – both at the time of its publication (it stoked Adolf Hitler’s hatred of Jewish people) and, worryingly, to this day. From this starting point, Solomon takes the audience on a tour of anti-Semitism, Zionism and anti-Zionism, and conspiracy theorists such as David Icke (whose infamous comments about ‘Lizard people’ controlling the world informed the show’s subtitle) who speaks at sell-out arena shows to audiences eager to hear how we are all being controlled by what he terms ‘Rothschild Zionists’ – wealthy and influential Jewish people who hold key positions in governments and institutions around the world. In reality, Icke and his ilk are simply regurgitating the false claims made in The Protocols… from nearly a century ago.

While this description may make Conspiracy Theory: A Lizard’s Tale sound like a dry lecture, it is nothing of the sort. While it is informative and educational, it is also playful with some good humour running through it. Solomon himself comes out with some witty one-liners and the show features songs made up of Facebook and Twitter comments by users who believe the anti-Semitic conspiracy theories and video clips. In one, Solomon plays a hairdresser who comes out with an anti-Semitic comment while cutting the hair of the onstage Solomon (by virtue of nicely timed pauses between the onstage and recorded Solomon and a clever positioning of a chair in front of the projector screen) and in another, an actor plays Sigmund Freud while Solomon explains how the controversial ‘William Shakespeare’s plays were actually written by Edward de Vere, the 17th Earl of Oxford’ theory came about as way for Freud to back up an assertion made in his influential 1921 work ‘The Interpretation of Dreams’ about how Hamlet is driven by the Oedipal complex.

Be in no doubt, the issue at the heart of the show – why do we believe conspiracy theories? – could not have come at a more pressing time. In an era of the ‘post-truth’ political culture where truth is on the defensive and rational arguments seem to be declining in the face of emotional driven statements (of which conspiracy theories are a key form), Solomon is on a mission to drive truth back onto the offensive. While this mission is difficult, thanks in no small part to social media allowing conspiracy theories to spread like wildfire, and sees anti-Semitism and conspiracy theories being driven from the ideas of the far-Right into discussions on the far-Left, the mere fact that he has gone to the lengths of writing and performing this show should be applauded. That he makes it entertaining and informative into the bargain should be saluted. This is a vital, intelligent show which deserves a wider audience.