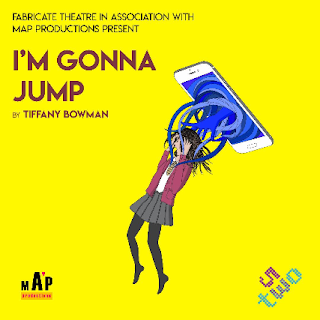 With such a title and publicity poster one might be forgiven for thinking this would be a comedy. You would certainly know what the play was about - or at least - have a very good idea. There is a rather worrying trend at the moment which has producers and backers trying to make new film and play titles more transparent. If a play is called 'I'm Gonna Jump' you can make two assumptions from this: one, the subject matter is about jumping (most probably suicide), and two; it involves youth (probably American) due to the use of 'gonna'.

Fabricate Theatre and MAP Productions' play of that name is indeed about teenage suicide, but it is most definitely not a comedy.

Stacey Harcourt plays Ella Chadwick in a one hour monologue which is something of a tour-de-force performance for her. Convincingly and easily playing a 18 year old school girl, she relates the problems she has with her home life (lives with her step dad who also happens to be one of the teachers at her school) and despite trying really hard, finds academic study just too much and rather boring. She even has a hobby of playing second violin in the school orchestra, but she is somewhat dissatisfied with that, wanting to play first but knowing she isn't good enough. Basically her life is in a slump and things get worse. Her best friend Chloe is 'perfect' and she looks up to her despite being envious. Always gets the top marks at school, always looks beautiful, etc etc...

However, it is the world of the internet which becomes Ella's curse. We all know only too well that teenagers put much store in Facebook 'likes', 'friends', followers on Twitter or Instagram etc.. and are all too needy for comments of encouragement or praise. Their online selves and lives being sometimes more important than their actual ones. Forever taking selfies and simply cannot put their phones down for more than 2 seconds!

In a series of unfortunate circumstances which spiral out of control like some Greek Tragedy, Ella is made to feel not the victim of misfortune (which she is), but instead unwanted, hated, debased, unfriended,  and eventually comes to the conclusion that the only way out of this mess is to make a video and post it to Youtube of her 'testimony' before she jumps from the highest point on the school building in a bid to commit suicide.

The monologue that we were privy to is essentially this testimony.

With the stage set with computers and computer paraphernalia and a large screen behind we first are shown a series of Youtube videos as we enter. Cute, humorous, animal videos which we can laugh at and go 'Ah!' to. This is a very clever opening, juxtaposing the mood of the play but cleverly introducing us to the play's theme. The screen then changes to reveal Ella's testimony video as she stands on the tower. It's a very powerful and emotional start.

The narrative continues with Harcourt acting on stage for the majority of the remainder of the show. The end reverts back to the video of her on the tower and her just about to jump before the video cuts out. These two montages work wonderfully and realistically. The other sections of videoed testimony in between were far less effective and weakened the impact of the first and last.

I am uncertain if indeed Ella, even after all the mishaps that have befallen her in such a short space of time, would see suicide as being the ONLY option. I am no teenage psychiatrist, but I think something, someone, or her own intellect, would have kicked in at some point before this very drastic measure. The play was also a little long too, despite Harcourt's superb and sympathetic performance.

This is still very much a work-in-progress, and certainly would benefit from further development, but with the winning combination of Tiffany Bowman's superb writing skills, pitching the language perfectly - a wonderful balance between how teenagers actually speak, and what is acceptable to an audience of mixed ages and experiences; Simon Naylor's no-punches-pulled realistic directing; and Stacey Harcourt's excellent delivery, a few more tweaks are all that is really needed.

A very powerful and thought-provoking piece of theatre tackling a tricky issue very sympathetically and naturalistically..